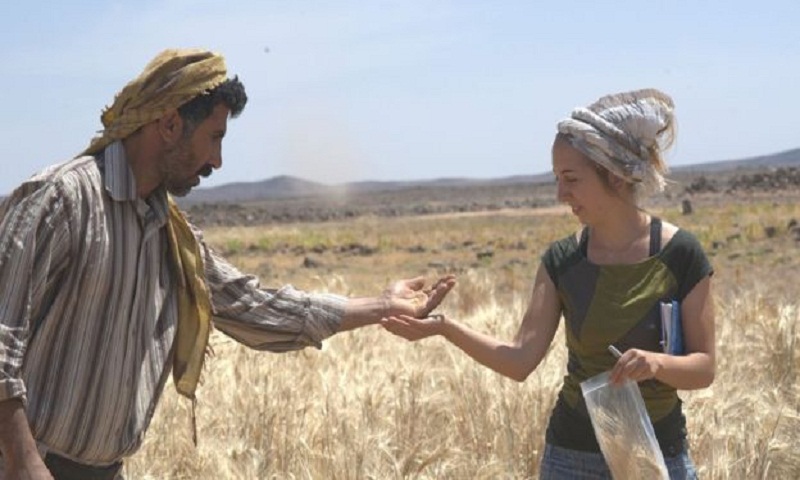 Take flour made from wild wheat and barley, mix with the pulverised roots of plants, add water, then bake.

According to scientists, this is the recipe for the world's oldest bread, dating back more than 14,000 years.

The bake would have looked like a flatbread and tasted a bit like today's multi-grain bread, they say.

Our ancestors may have used the bread as a wrap for roasted meat. Thus, as well as being the oldest bread, it may also have been the oldest sandwich.

"This is the earliest evidence we have for what we could really call a cuisine, in that it's a mixed food product," Prof Dorian Fuller of University College London told BBC News.

"They've got flatbreads, and they've got roasted gazelle and so forth, and that's something they are then using to make a meal."

Bread has long been part of our staple diet. But little is known about the origins of bread-making.

Until now, the oldest evidence of bread came from Turkey 9,000 years ago.

The latest find, from an archaeological site in the Black Desert in Jordan, pushes back the first evidence for bread-making by more than 5,000 years.

Analysed under the microscope, the bread samples showed tell-tale signs of grinding, sieving and kneading.

Dr Amaia Arranz-Otaegui of the University of Copenhagen, who discovered the remains of the bread, said it was the last thing they expected to find at the site.

"Bread is a powerful link between our past and present food cultures," she said. "It connects us with our prehistoric ancestors."

The bread would have been made in several stages, including "grinding cereals and club-rush tubers to obtain fine flour, mixing of flour with water to produce dough, and baking the dough in the hot ashes of a fireplace or in a hot flat-stone", she explained.

The people living in the area at the time were hunter gatherers. They would have hunted gazelle and trapped smaller animals such as hares and birds.

They also foraged for plant foods such as nuts, fruits and wild cereals.

The researchers think the bread was made when people gathered together for a celebration or feast.

This happened before the advent of farming, when people started growing cereal crops and keeping animals.

This raises the intriguing possibility that growing cereals for bread may have been the driving force behind farming.

"The significance of this bread is that it shows investment of extra effort into making food that has mixed ingredients," said Prof Fuller. "So, making some sort of a recipe, and that implies that bread played a special role for special occasions.

"That in turn suggests one of the possible motivations as to why people later chose to cultivate and domesticate wheat and barley, because wheat and barley were species that already had a special place in terms of special foods."

The bread was unleavened and would have resembled a wrap, pitta bread or chapatti.

Researchers have tried to reconstruct the recipe in the lab. They say the mixed grains gave the bread a nutty flavour, much like today's multi-grain loaves.

Lara Gonzalez Carretero of the UCL Institute of Archaeology, who is an expert on prehistoric bread, examined the 24 crumbs under an electron microscope.

"This would be a bread made of wild wheat and wild barley flour, mixed with water, and cooked on a hearth on a fireplace," she said.

"There's also the addition of wild tuber flour into it which gives a slightly nutty, bitter flavour to it."

Turkish bread recipe from 9,000 years ago

Add ground beans such as chick peas and lentils

Cook in an oven.