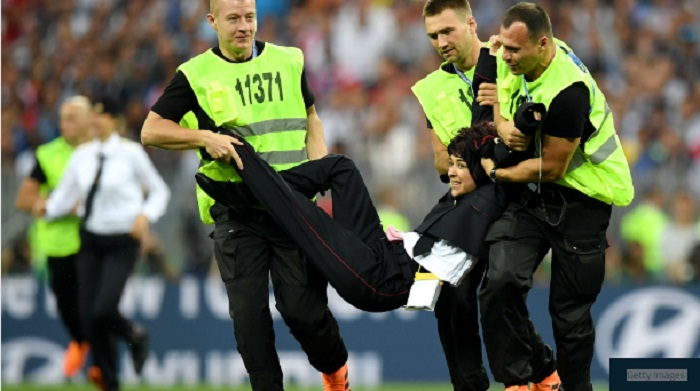 The World Cup final was interrupted on Sunday by four pitch invaders dressed in suits, in a concerted action claimed by Pussy Riot.

The intruders entered the field at the Luzhniki Stadium in Moscow, causing a brief stoppage in the game between France and Croatia in the 52nd minute.

The quartet were allowed to high-five members of the French team before being accosted and unceremoniously dragged off the playing surface.

Russian protest group Pussy Riot quickly claimed responsibility in a tweet which read: "Right now, there are four members of the band in the World Cup final."

The punk rock band is famous for its vocal opposition to the government of Russian president Vladimir Putin and defence of feminist and gay rights issues.

Pussy Riot gained global visibility for a controversial concert held in 2012 inside a Moscow cathedral, which was condemned as sacrilegious by Orthodox church authorities.

Three group members were subsequently arrested and sentenced to prison terms on religious hatred charges, a verdict that was slammed by human rights campaigners.

The band also performed during the 2014 Winter Olympics in Sochi, before being forcefully stopped by security officials.

France were crowned champions of the 2018 World Cup after the pitch invasion, prevailing 4-2 over Croatia in an action-packed final.