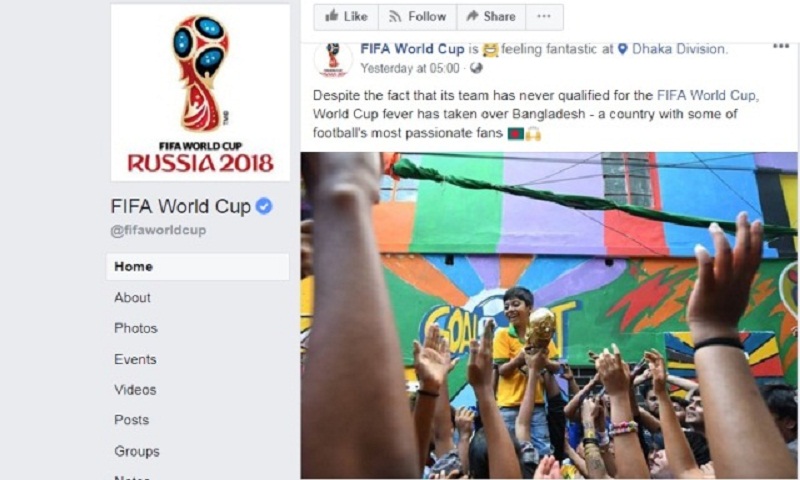 World football's governing body FIFA has shown the whole world the story of Bangladesh's football frenzy through its official World Cup Facebook page along with pictures of graffitis and fans celebrating the World Cup, reports UNB.

FIFA’s official Facebook page on Monday morning acknowledged Bangladeshi peoples’ enthusiasm to football by uploading a post containing four images with a caption, “Despite the fact that its team has never qualified for the FIFA World Cup, World Cup fever has taken over Bangladesh - a country with some of football's most passionate fans.”

The images were mostly of Old Dhaka, showcasing how colourfully some of the streets and buildings were painted. There was also an image of fans gathering at TSC to watch a match.

Meanwhile, Bangladesh fans posted on the comment section of FIFA’s post expressing joy and happiness while fans from abroad also cheered for Bangladesh.

One Brazilian fan Ricardo Cunha wrote: “I'm amazed how Bangladesh support Brazil. Thank you all. Bangladesh got a Brazilian Fan. Hope see you in Qatar 2022 or at least see Bangladesh vs Brazil playing a friendly.”

So far, 67 thousand people expressed their emotions while the post was shared 19,277 times till filing of this report on Tuesday morning.