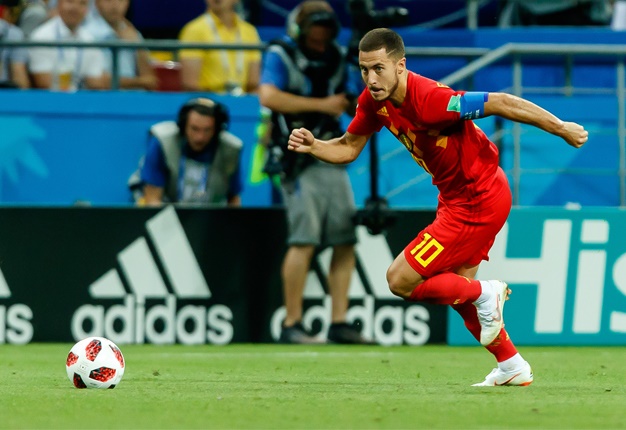 Eden Hazard and a brilliant Belgian generation stand between France and a place in the World Cup final as the countries bring their historic rivalry to Tuesday's first semi-final in Saint Petersburg.

Not since 1986 have Belgium made it this far at the World Cup, losing to a Diego Maradona-inspired Argentina in Mexico and then going down 4-2 to France in the third-place play-off, the last competitive meeting of the nations.

In the years since, France have won one World Cup and one European Championship, and lost the 2006 World Cup final. Now, with Kylian Mbappe their new standard-bearer, they are dreaming of getting there again.

Belgium disappeared from the forefront of the international scene for years before emerging once more with their current gifted crop.

With Hazard, Romelu Lukaku and Kevin De Bruyne, they lost in the 2014 World Cup quarter-finals and at the same stage at Euro 2016, but under Roberto Martinez in Russia they have already taken an extra step after stunning Brazil in the last eight in Kazan.

"They are a great team with a very good generation of players who have been playing together for several years," admitted France striker Olivier Giroud, who plays with Hazard and Belgium goalkeeper Thibaut Courtois at Chelsea.

"We don't want to have them taking the mickey out of us. There is a big rivalry between France and Belgium, it's like a derby match."

Beyond the geographical and linguistic ties, many of these players also know each other intimately from the Premier League.

Paul Pogba and Romelu Lukaku were already close friends before becoming colleagues at Manchester United. But Hazard sums up better than anyone the close links between the nations.

Born in the French-speaking part of Belgium, he came through as a player across the border at Lille, and was the outstanding player in the team that won the French league and cup double in 2011 before eventually moving on to Chelsea.

Now he is the talisman in a Belgium team who have won all five games in Russia so far and are undefeated in 24 matches, although as a boy he idolised Zinedine Zidane.

The French will remember well what happened when the teams last met, with Belgium tearing them apart in a 4-3 friendly win in Paris in June 2015.

And the presence of French World Cup winner Thierry Henry on the Belgian coaching staff as one of Martinez's assistants adds extra spice to the occasion.

"Of course I would prefer it if he were with us and he were giving me his advice, but we mustn't be jealous," said Giroud.

Henry's old international colleague Didier Deschamps has not won over everybody in his time as France coach, as he continues to favour a cautious approach despite being able to call on some of the finest attacking talents in world football.

Mbappe, still just 19, has already moved clubs for 180 million euros ($212 million) and the Paris Saint-Germain forward announced himself on the World Cup stage with his brilliant performance in France's 4-3 win over Argentina in the last 16.

Deschamps' side were less thrilling, but equally efficient, as they saw off Uruguay in the quarter-finals. They will need to be at their very best defensively against the Belgians, and look to Mbappe and Antoine Griezmann to get the better of the opposition defence.

"To do what (Mbappe) is doing at his age, I have never seen that, apart from Messi," said Belgium's Nacer Chadli, scorer of their winning goal against Japan in the last 16.

"We came through the Japan game, then we broke down a barrier by beating Brazil. When you beat Brazil you don't fear anyone."

Chadli could play as a right wing-back for Belgium in the absence of the suspended Thomas Meunier, with Thomas Vermaelen possibly starting. France welcome back midfielder Blaise Matuidi after suspension.