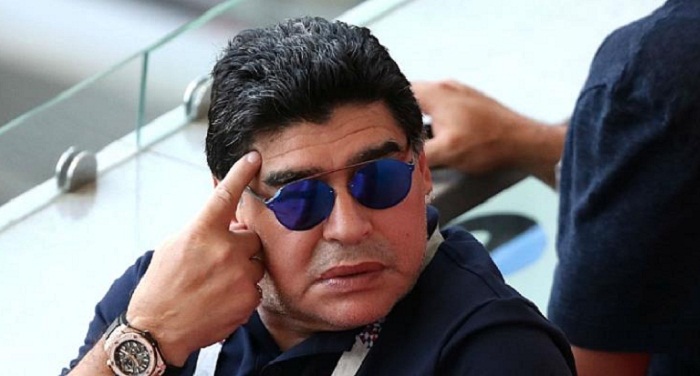 Argentina legend Diego Maradona has apologised to Fifa for saying England committed a "monumental robbery" in beating Colombia in the World Cup last 16.

Fifa said his comments were "entirely inappropriate" and insinuations about the referee "completely unfounded".

"I said a couple of things and, I admit, some of them are unacceptable," said Maradona on social media.

Maradona posted his message below a picture of himself and Fifa president Gianni Infantino, apologising to both the Swiss and football's world governing body.

"I have absolute respect for the work - which is not easy - that the institution and the referees do," he added.

Maradona, 57, felt Geiger should have penalised Harry Kane for a foul on Colombia's Carlos Sanchez instead of awarding the penalty that allowed the England captain to open the scoring just before the hour mark in Moscow.

"Here's a gentleman who decides, a referee who, if you Google him, shouldn't be given a match of this magnitude... Geiger, an American, what a coincidence," Maradona had said on his nightly World Cup show for the Venezuela-based Telesur broadcaster.

Maradona was pictured wearing a Colombia shirt prior to the game and TV images showed him celebrating Yerry Mina's late equaliser.

Fifa said it was "extremely sorry" to read the comments from "a player who has written the history of our game".

"Fifa strongly rebukes the criticism of the performance of the match officials which it considers to have been positive in a tough and highly emotional match," it said.

'He only spoke English, some bias was certain'

Geiger often struggled to control a feisty encounter in Moscow, which England won on penalties.

"This situation was undermining us," said Falcao.

Former Chelsea and Manchester United striker Falcao was one of six Colombia players booked by Geiger, while two England players had their names taken.

"The referee disturbed us a lot, in the 50-50 plays, he always made the calls in favour of England," said Falcao. "He didn't act with the same criteria for both teams. When in doubt, he always went to the England side.

"I found it peculiar that they put an American referee in this instance. To tell you the truth, the process leaves a lot of doubts."