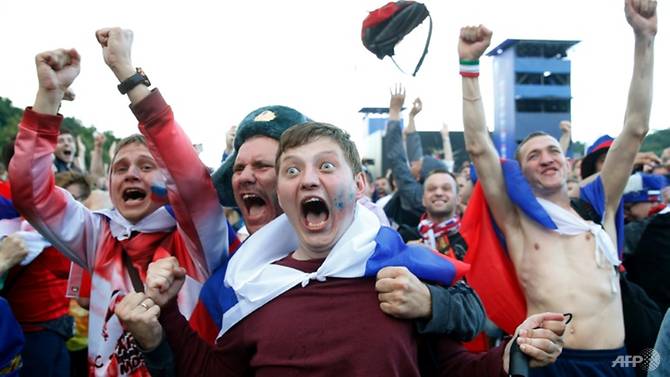 Russia will try to keep their unlikely dream alive on Saturday (Jul 7) when the host nation face Croatia in their first World Cup quarter-final since 1970.

It has been an enchanted summer for the world's largest nation as it hosts the biggest event in sport.

Russia's once-hapless team have suddenly turned into giantslayers who dispatched 2010 champions Spain in the last 16 and are now seriously contemplating reaching the Jul 15 final.

The World Cup itself has been blissfully free of the hooligan battles and racist monkey chants that blighted Russian domestic league and international matches.

And President Vladimir Putin has managed - if only briefly - to stem the tide of Western media criticism by presenting Russia as a fun-loving and welcoming place.

"Many stereotypes about Russia have simply collapsed," Putin told a group of high-profile former players at a Kremlin reception on Friday.

European bookmakers still expect Croatia and their elegant midfielder Luka Modric to prevail in the quarter-final in the balmy Black Sea resort of Sochi.

But Russia's players are exuding a breezy confidence that comes from having avoided the fiasco many fans had initially feared.

"Even before the tournament started, we all knew we could reach the final," said star midfielder Alexander Golovin.

"Now, we are seriously counting on it."

Few Russians agreed with Golovin when they entered the tournament as its lowest-ranked nation and without a win in eight months.

A thumping start in which Russia scored eight goals in wins over Saudi Arabia and Egypt generated mostly surprise and relief.

A 3-0 loss to Uruguay that gave Russia the unenviable matchup with Spain was met with resigned shakes of the head from fans familiar with defeat.

But coach Stanislav Cherchesov worked up a rousing defensive effort against the Spaniards that pushed the match into extra time and eventual penalties with the score tied 1-1.

"You have to know how to suffer," silver-haired midfielder Alexander Samedov said of the constant Spanish pressure.

"We showed that we could."

A winning left-foot save from 'keeper Igor Akinfeev produced the moment of magic that brought fans from Kaliningrad to Kamchatka pouring out onto the streets in astonished glee.

Cherchesov and the players know they have already won over the nation and secured their place in Russian football history.

The coach and his masterful moustache have turned into an internet meme that has come to symbolise Russians' love affair with their team that has defied the odds.

They are the first post-Soviet team to either make it out of a World Cup group or win a knockout game.

The hosts have played their hearts out and are probably not as big an underdog against Croatia as they were in the game they just won.

A victory on Saturday would see Russia face either England or Sweden in only their second World Cup semi-final since 1966.

Not too many Russians are optimistic enough to look that far ahead.

Just 17 per cent told a state pollster they thought Russia could actually win the entire tournament - about the same number as the day after their Saudi win.

Yet seven out of 10 say they now are watching matches and the atmosphere has grown more electric by the day.

"Against Spain, the stadium breathed as one," the new hero said. "We are nothing without their emotions."