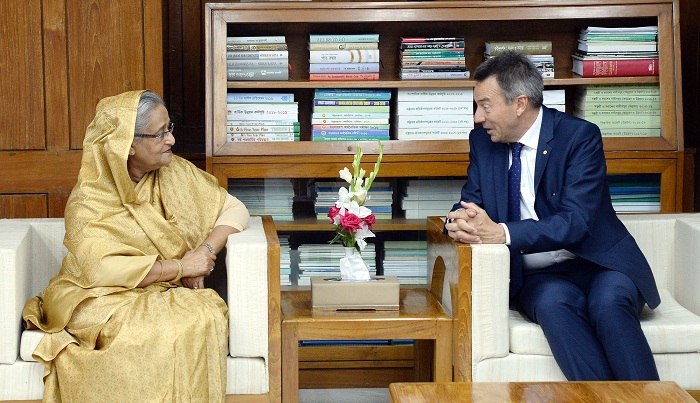 Visiting President of the International Committee of the Red Cross (ICRC) Peter Maurer on Monday said he saw a positive change in the Myanmar army chief’s attitude towards the repatriation of Rohingyas from Bangladesh.

The Red Cross chief came up with this observation while meet Prime Minister Sheikh Hasina at her Sangsad Bhaban office on Monday.

PM’s press secretary Ihsanul Karim briefed journalists after the meeting quoting as Peter Maurer told, “I was moderately encouraged by the positive posture of the [Myanmar] Army chief.”

During his Myanmar visit, Karim said, the ICRC chief talked to Buddhist monks and civil society members and opined for creating conducive atmosphere in Myanmar for the return of the refugees alongside reconciliation.

Peter Maurer put emphasis on generating economic activities where the Rohingya people live. “The ICRC will facilitate these activities,” he said.

Peter mentioned that the Myanmar side constructed 130 villages for the Rohingya people. “I was shocked to see the destroyed villages.”

The ICRC chief said there are around 250,000 Rohingyas living in Myanmar and the situation in Rakhine has to be stabilised. “We’ll do our best to facilitate the matter,” Peter said.

Regarding the influx of huge Rohingya refugees into Bangladesh, the ICRC chief said this is a multidimensional humanitarian problem, and praised Bangladesh for what it is doing for the Rohingyas. “We’ll continue to support Bangladesh, it’ll complementary to the UN system,” he said.

He presented two pictures of Bangabandhu Sheikh Mujibur Rahman from their archive to the Prime Minister.

Sheikh Hasina said it is good to hear that Myanmar is now positive about the issue and mentioned that Bangladesh already has huge population and the influx of such refugees is a serious burden on the country.

“Bangladesh will lend all-out support and cooperation to the ICRC in their activities,” Hasina said.