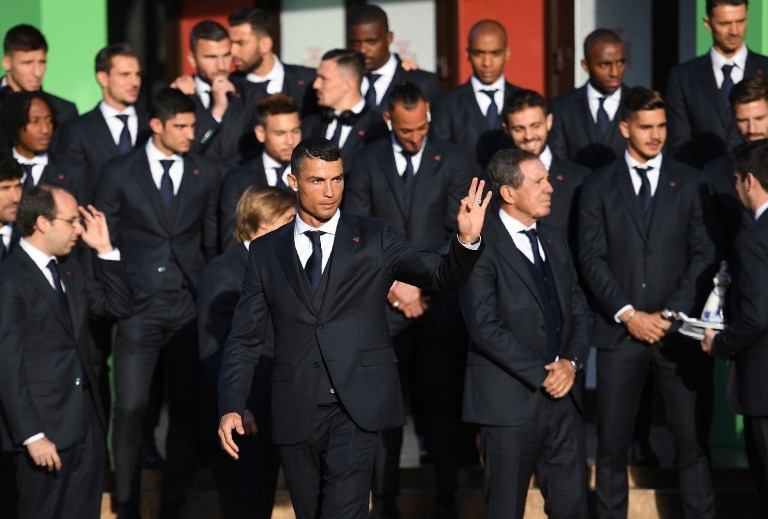 Cristiano Ronaldo's Portugal arrived Saturday in Russia to begin final preparations for a World Cup campaign that pits them against arch-rivals Spain.

The European champions play their Iberian neighbours in the 2014 Winter Olympics host city Sochi in the opening match for both nations Friday.

Ronaldo and his compatriots received a traditional Russian welcome during a bread and salt ceremony upon arrival at their team base camp in Kratovo, a leafy village 40km southeast of Moscow.

The Real Madrid star was the last player off the team bus escorted by police to the team's tournament headquarters after touching down at Zhukosvky Airport on the outskirts of Moscow.

Portugal are scheduled to hold their first team session at the Saturn training centre at 1130 local time (0830 GMT) on Sunday.

Fernando Santos's side will need no reminding of the importance of their opening match against Spain, after a 4-0 defeat by Germany in Brazil fours years ago set the tone for a dismal group stage exit.

The winner on June 15 at Sochi's Fisht Stadium will be in pole position to come out on top in a Group B that also includes Morocco and Iran.

The Spaniards arrived at their own base in the southern Russian city of Krasnodar on Thursday.

Portugal are ranked fourth by FIFA and won nine of their 10 European qualifying group matches.

It will be the team's seventh World Cup appearance and the 33-year-old Ronaldo's fourth and likely last campaign.

Their best result saw them finish third in 1966.