From Banks to Pele and Ronaldo: A World Cup all-time XI 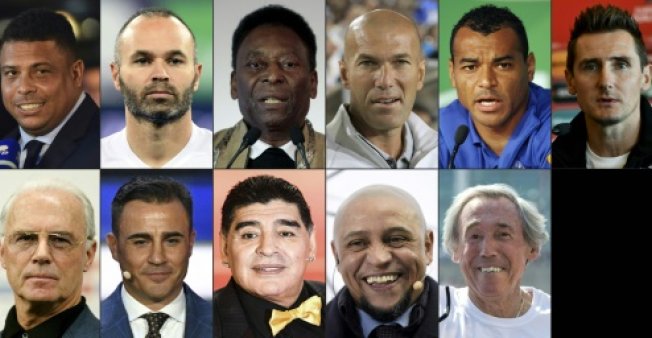 From the goalkeeping heroics of Gordon Banks to Diego Maradona’s ‘Hand of God’ and ‘O Rei’ Pele, AFP Sport selects a team of 11 of the greatest players in World Cup history:

Banks was the goalkeeper when England won the World Cup on home soil in 1966, although he is best remembered for an incredible save, low down to his right, to deny Pele in a group-stage encounter in Mexico 1970. Banks, who spent most of his club career with Leicester City and Stoke City, eventually had to retire from professional football after losing the sight in one eye in a car crash in 1972.

Together, these two Brazilians revolutionised the role of the full-back, Cafu on the right and Roberto Carlos on the left. Right-back Cafu, who starred for Roma and AC Milan, played in the Brazil team that won the 1994 World Cup and was captain in 2002, by which time Real Madrid great Roberto Carlos was also part of the side. Both played in the 1998 final defeat against France.

Known as ‘Der Kaiser’, Beckenbauer was the first great libero, dominating games from the back in his role as a sweeper. The Bayern Munich legend played in the 1966 final, and then famously played with his arm in a sling during West Germany’s defeat against Italy in the 1970 semi-final, the ‘Game of the Century’. But he also lifted the trophy on home soil four years later when West Germany ended the dream of Johan Cruyff and the Dutch, triumphing 2-1 in the final in Munich. He later coached the West Germans to victory over Argentina in the 1990 final.

The archetypal Italian defender, Cannavaro combined his brilliant positional sense and reading of the game with a nasty side when required. A star with Juventus and Real Madrid amongst others, he captained Italy to glory in 2006, when the Azzurri overcame France on penalties in the final.

A masterful playmaker, Zidane was arguably the greatest player of his generation. And he left his mark on the World Cup for two very different reasons. He scored twice in France’s 3-0 final win over Brazil as hosts in 1998 and is part of an elite club of players, along with Geoff Hurst, Vava and Pele, to have scored three times in World Cup finals-he also netted a penalty in the 2006 showpiece in Berlin, before later being sent off for an unforgettable headbutt on Italy’s Marco Materazzi in his last game as a professional. Indeed, Zidane is the only player-along with Cameroon’s Rigobert Song-to have been red-carded twice at a World Cup.

The Barcelona legend is another glorious playmaker to have graced the World Cup, and to have scored a decisive goal in a final. Iniesta was one of the key members of the Spanish side that won the trophy in South Africa in 2010 -- either side of back-to-back European Championships-thanks to their mesmerising ‘tiki-taka’ style. He got the only goal as Spain beat the Netherlands in extra time in Johannesburg. Iniesta has just left Barcelona to continue his club career in Japan, but he is still part of the Spain squad bound for Russia.

No single player has dominated a World Cup like Maradona did in 1986, when he led Argentina to glory in Mexico. He scored twice in the quarter-final win over England, his infamous ‘Hand of God’ goal being followed by arguably the greatest individual goal ever scored at a World Cup. A brace in the semi-finals saw off Belgium, before he skippered the ‘Albiceleste’ to their 3-2 win over West Germany in the final. Maradona also helped Argentina all the way to the final in 1990, where they lost to the same opponents. Having first featured at a World Cup in 1982, he bowed out of the tournament in 1994 following a failed drugs test in the United States.

17-year-old Brazilian forward Pele (L) kicks the ball past two Welsh defenders during the World Cup quarterfinal soccer match against Wales on 19 June 1958 in Goteborg. Pele scored the only goal of the match to help Brazil advance to the semifinals. Photo: AFPPele, nickamed ‘O Rei’ (The King), is still considered the greatest player of all time, and is the only player to have won three World Cups, having been involved in all of Brazil’s victories in 1958, 1962 and 1970. He missed most of the 1962 tournament due to injury, but he was just 17 when he netted twice in the 5-2 win over hosts Sweden in the 1958 final, while he also scored in the 1970 final victory over Italy. Pele scored four goals in that tournament in Mexico, but he also lit up that competition at other moments, like his dummy of the Uruguayan goalkeeper and an outrageous attempt from his own half against Czechoslovakia that went inches wide.

Born in Poland, Klose was never one of the most glamorous names, but he holds the record for the most goals at a World Cup with 16 scored over four tournaments from 2002 to 2014. The ex-Werder Bremen and Bayern striker played in the Germany side that lost 2-0 to Brazil in the 2002 final, was the top scorer when Germany reached the semi-finals as hosts in 2006 and took the record en route to helping his team lift the trophy in Brazil four years ago.

‘O Fenomeno’ had his ups and downs at World Cup. He was in the Brazil squad as a 17-year-old but didn’t play as they won the 1994 tournament in the USA, while a mysterious fit struck him down just before the 1998 final, although he still played as Brazil lost 3-0 to France. Ronaldo recovered from that and was the top scorer in 2002, scoring both goals in the final win over Germany. He then bowed out of the tournament in 2006, when Brazil lost to France in the quarter-finals.