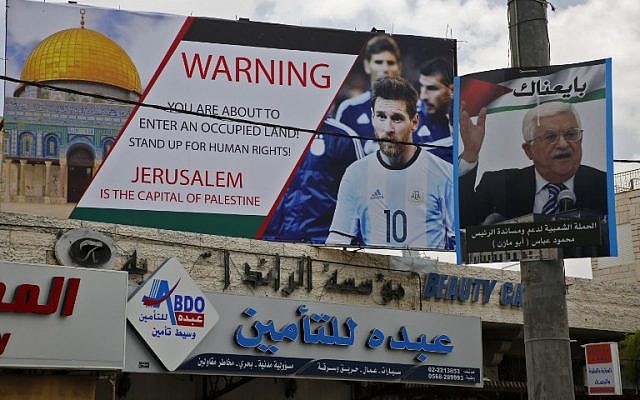 Lionel Messi and his team-mates were due to face Israel on Saturday in their final warm-up match before heading to Russia for the World Cup.

However multiple reports in Argentina on Tuesday said the game had either already been scrapped or was soon to be.

Argentine Foreign Minister Jorge Faurie did not confirm the game had been axed, but told reporters in Washington on the sidelines of the Organization of American States meeting that he believed players had been reluctant to travel to Israel for the game.

"As far as I know, the players of the national team were not willing to play the game," Faurie said. The Argentine official said team coach Jorge Sampaoli had requested no further matches be scheduled ahead of the team's World Cup opener against Iceland in Moscow on June 16.

The Argentina Football Association did not immediately comment on the reports.

If cancellation of the game is confirmed, it will mean Argentina head into the World Cup with hardly any pre-tournament match preparation.

Their only other World Cup warm-up game was a 4-0 victory over Haiti in Buenos Aires last week which resembled a training exercise.

Sampaoli had last week aired misgivings about having to travel to Israel for the game, noting he would have preferred to remain in Barcelona, where the team is holding its training camp.

"From a sporting point of view, I would have preferred to play in Barcelona," Sampaoli said.

"But that's the way it is, we have to travel on the day before the match, play Israel in Israel and then from there go on to Russia."

On Sunday, Palestinian football boss Jibril Rajoub urged Messi not to play in an Argentina-Israel game in Jerusalem and urged fans to burn their shirts if he does.

At a news conference in the West Bank city of Ramallah, Rajoub told journalists he had written to Argentina's government asking that Messi not take part in the June 9 friendly.

"This match has become a political tool," Rajoub said in Arabic.

"The Israeli government is trying to give it political significance by insisting it be held in Jerusalem."

Palestinians are outraged at US President Donald Trump's decision last December to recognise Jerusalem as Israel's capital, breaking with decades of policy, and move his country's embassy there.

The embassy opened on May 14, fanning Palestinian anger and intensifying protests on the Gaza border, with Israeli forces killing dozens at least 61 Gazans that day.

Palestinians claim the eastern part of Jerusalem, annexed by Israel, as the capital of their future state. The Jewish state considers the entire city its own "indivisible" capital.

"Messi is a symbol of peace and love," Rajoub said. "We ask him not to participate in laundering the crimes of the occupation."

Messi, he added, "has tens of millions of fans in the Arab and Muslim countries... we ask everyone to burn their shirts which bear his name and posters (with his image)."