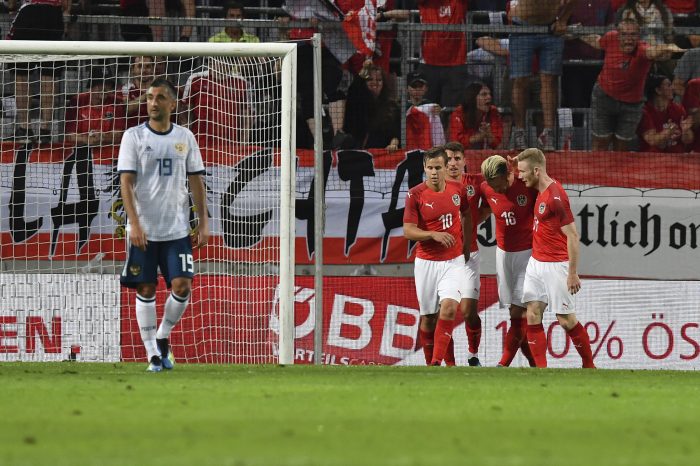 World Cup host Russia slumped to a 1-0 defeat in a friendly against Austria on Wednesday, extending its winless streak to six matches.

Russia has lost all three games in 2018 after defeats to Brazil and France in March, and has not won a game since beating South Korea in October.

Austria winger Marko Arnautovic set up midfielder Alessandro Schoepf for the only goal in the 28th minute, giving coach Franco Foda his fourth win from four matches since taking over from Marcel Koller in November after the team failed to qualify for the World Cup.

"We have to improve our passing," Russia coach Stanislav Cherchesov told Austrian broadcaster ORF. "We created one, two chances to score but we have to do more."

The match, which was Russia's first abroad since beating Hungary 3-0 in Budapest a year ago, marked the end of the team's 10-day training camp in the Austrian region of Stubaital.

Russia plays Turkey in Moscow on Tuesday in its final warmup game before opening the World Cup against Saudi Arabia on June 14. It also plays Egypt and Uruguay in Group A.

Russia started with high pressing but gradually lost control of the match after 15 minutes. Most of its attacks lacked pace and accuracy, while the defense looked vulnerable.

Leading up to the goal, Vladimir Granat and Fyodor Kudryashov gave Arnautovic time to control the ball and set up Schoepf, who was not marked closely enough by Mario Fernandes and beat goalkeeper Igor Akinfeev with a powerful shot just under the crossbar.

"We didn't give away much in defense and our forward play was effective. It was a deserved victory," Schoepf said.

Austria, which also beat Russia 1-0 twice in qualification for the 2016 European Championship, will host world champion Germany in Klagenfurt on Saturday and Brazil in Vienna next Sunday.