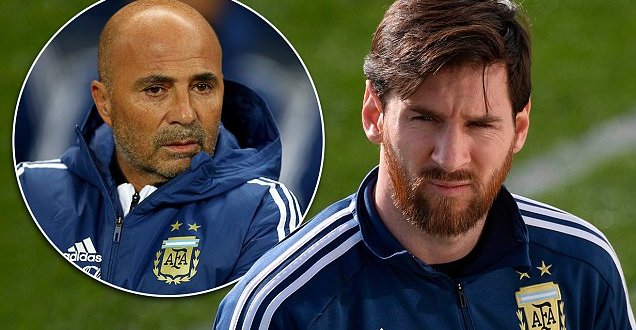 Argentina coach Jorge Sampaoli's career got a leg up when he was spotted up a tree barking orders at his home town's amateur side.

The tree offered the best vantage point at a ground where there was no stand. That day, as was often the case, the referee had banished Sampaoli from the touchline for protesting.

The story goes that an executive at Newell's Old Boys saw a photograph of the budding coach up the tree in the local paper, liked Sampaoli's passion and offered him a job coaching Newells' second-division nursery club, Argentina de Rosario.

It gave Sampaoli, nicknamed "Lefty", his start in the professional game. Years later, after successfully managing club sides in Peru, Chile and Ecuador, his big breakthrough came when he coached Chile to victory in the 2015 Copa America.

Success took him to Europe, where he coached Sevilla, before being tapped last year by a desperate Argentine football association on the brink of failing to qualify for Russia.

It took a backs-to-the-wall performance at high altitude in Quito and a Lionel Messi hat-trick to beat Ecuador 3-1 and qualify.

'A gun to his head, called the World Cup'

The key to a good showing in Russia is to get the best out of Messi, Sampaoli says unsurprisingly.

He believes Messi should play with the shackles off, as he does for Barcelona. It's what the world wants to see.

Instead, he plays "as if he has a gun to his head, called the World Cup! If he doesn't win, it goes off and it kills him. It's crazy that he cannot enjoy his talent," the coach says.

Short, and with a rapid, agitated walk, Sampaoli is almost always seen in a tracksuit.

Friends say he drives his car like a madman. At 58, he remains unpredictable, given to sudden outbursts of anger.

A recent spat with an Argentine traffic policeman paints him in a poor light. He insulted the policeman about his meagre pay when he was pulled over. He was forced to apologise after a public outcry.

"Lefty doesn't like to lose even at marbles. I was fighting for 10 years with him, even though we are brothers-in-law," said Mario Bonavera, Sampaoli's coach at Argentine club Alumni before injury forced him to stop playing at age 19.

On his arm, Sampaoli sports a tattooed quote from another Argentine rebel, Che Guevara: "Live your life not celebrating victories, but overcoming defeats."

His mission is to win the cup, to succeed where Jose Pekerman failed in Germany in 2006, where Diego Maradona failed in South Africa in 2010 and where Alejandro Sabella failed in Brazil four years ago.

"Football owes a World Cup to Messi," he says.