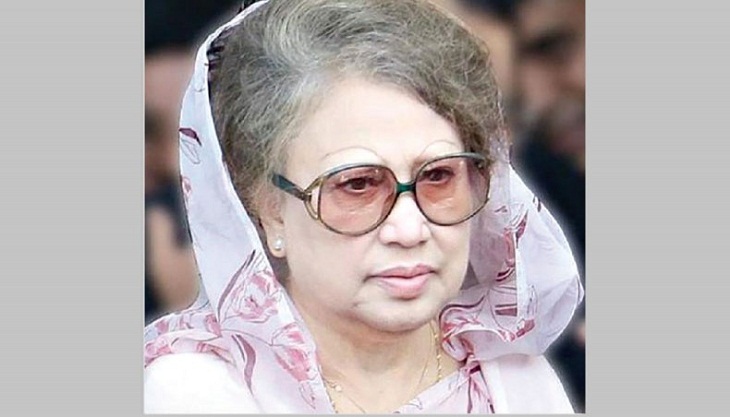 The Appellate Division of the Supreme Court on Tuesday stayed until Thursday a High Court order that had granted bail to BNP Chairperson Khaleda Zia in two cases filed in Cumilla, reports UNB.

The chamber judge of the Appellate Division Justice Hasan Foez Siddique passed the order after hearing a petition filed by the state challenging the HC order, and sent the appeal to the regular Appellate Division bench fixing Thursday for the next hearing.

Now, the Appellate Division full bench, led by Chief Justice Syed Mahmud Hossain, will hear the state appeal against the bail on Thursday.

Earlier, on Monday, the High Court granted the interim bail to the BNP Chairperson in the two cases and rejected the bail petition in a defamation case filed in Narail.

Soon after the HC order, the government filed a petition with the Appellate Division challenging it.

Of the cases, two were filed in Cumilla on charge of plotting to carry out subversive acts and another in Narail on defamation charges.

On May 19, the HC granted permission to Khaleda for filing the bail petitions after her lawyers appealed for permission.

However, the BNP chief was not freed from jail as she was shown arrested in the cases filed with different police stations in Cumilla, Dhaka, Narail and Panchagarh.

The BNP chairperson is now facing a total of 36 cases.

Eight people were killed and at least 20 others injured when miscreants hurled a petrol bomb at a bus at Jogmohanpur in Chouddagram of Cumilla district during the BNP-led alliance's movement on February 3, 2015.

A covered van was vandalised and torched in Chouddagram on Dhaka-Chattogram Highway onJanuary 25in 2015.

Two cases were filed against Khaleda in this connection.

On December 21, 2015, Khaleda Zia at a discussion at the Institution of Engineers, Bangladesh raised questions about the actual number of Liberation War martyrs saying, "There're controversies over how many people were martyred in the Liberation War."

Reacting to Khaleda's remark, a defamation case was filed against her with a Narail court onDecember 24.