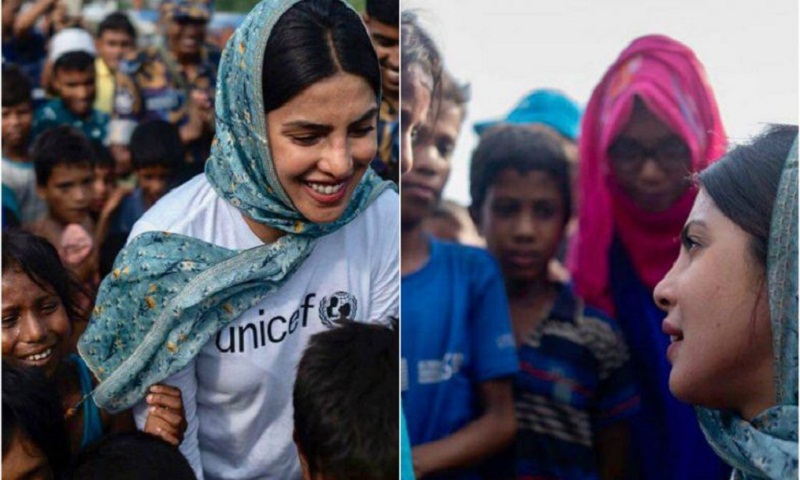 Priyanka visited a number of Rohingya camps in Teknaf upazila of the district. She first visited the camp set up at Hariyakhali Anchor point under Sabrang union of Teknaf upazila.

Hariyakhali is known as the entrance point from which these refugees entered Bangladesh from Myanmar.

Priyanka, from Hariyakhali, went to Leda camp, where she visited a child development centre established by Unicef.

She also visited the camp in Unchiprang area, where around 30,000 Rohingya people are currently staying.

On Monday, the Bollywood actress, now on a four-day visit (May 21-24), has sought support for Rohingya children saying these kids are their future and the world needs to care about them.

Hours after her arrival in Dhaka on May 21, she left for Cox’s Bazar by a private airlines flight.

She said the world saw horrific images of ethnic cleansing from the Rakhine State of Myanmar. This drove nearly 700,000 Rohingyas across the border into Bangladesh – 60 percent of them children.

She will fly to Dhaka on Thursday.

After spending two days in Cox’s Bazar, Priyanka, who was named a global Unicef Goodwill Ambassador, after serving as a National Goodwill Ambassador to India for 10 years, is scheduled to return to Dhaka on Thursday and leave Dhaka in the evening on the same day.

The actress has flown to Dhaka from London, where she attended her friend and actress Meghan Markle's wedding to British Royal Prince Harry.