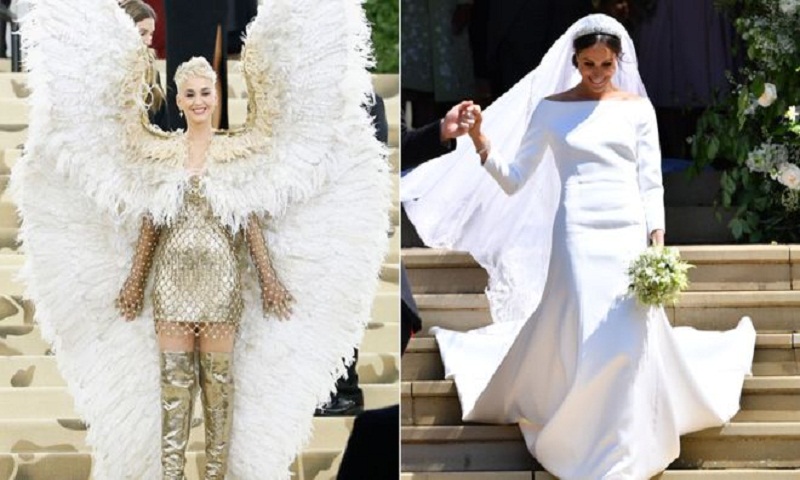 The pop star suggested it fell short of the bridal look Alexander McQueen designed for the Duchess of Cambridge's marriage to Prince William in 2011, adding "Kate won!"

Despite her criticism, Perry said she was "so happy" for the couple.

"I would have done one more fitting," Perry quipped of the Duchess of Sussex's Givenchy gown. "I'm never not going to tell the truth! One more fitting, but I love you."

The Duchess's wedding dress - which had been kept a closely-guarded secret - was finally revealed when she stepped out at St George's chapel in Windsor on Saturday.

Kensington Palace said the Duchess chose to work closely with the Birmingham-born designer because of her "timeless and elegant aesthetic, impeccable tailoring, and relaxed demeanour".

The minimalist boat neck, which framed Ms Markle's shoulders and emphasised her waist, heavily contrasted with the Duchess of Cambridge's high V-necked lace-covered gown in 2011, which was designed by Sarah Burton of Alexander McQueen.

Perry made the remarks while speaking to Entertainment Tonight's Lauren Zima during night one of the American Idol finals.

In the same interview, she went on to praise the new Duchess for her humanitarian work and social consciousness.

"It's amazing what she's doing with all this, her humanitarian efforts," she said.

"The fact that she's a proud feminist, I love all that. I support her as another woman and love her and wish them both well," Perry added.