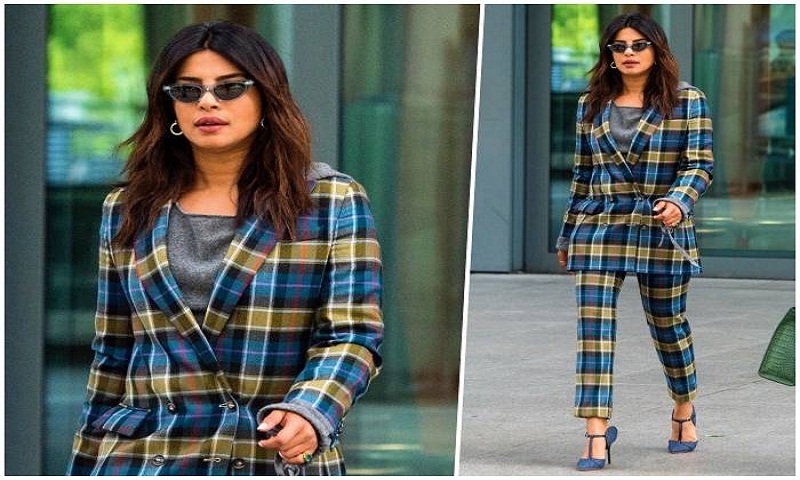 Priyanka Chopra finally arrived in England for her friend Meghan Markle and Prince Harry’s royal wedding. The Suits actor marries the the British royal at Windsor Castle on Saturday.

One of the most-anticipated guests at the high-profile wedding, Priyanka arrived at London’s Heathrow Airport on Friday, looking slick in her pre-wedding outfit – a plaid pantsuit from Italian fashion designer Alberta Ferretti. A suited and booted Priyanka looked like the epitome of travel chic in her tailored blue and green separates. She completed the bold look with a low-key grey hoodie, pointy-toe denim heels, narrow-framed sunglasses and her hair styled in soft, messy curls.

Priyanka was latter seen rocking her plunging plaid blazer and coordinating pants – minus the hoodie – with a black hat, as she visited iconic British fascinator designer Philip Treacy’s studio to pick out her hat for Saturday’s ceremony.

While details of Priyanka’s royal wedding look have been kept under wraps, the actor had spoken about searching for hats and getting a crash course in fascinators ahead of the big day. She told People, “I have to wear a hat to this thing I’m going to soon, and a friend of mine recommended a fascinator, and I didn’t know what that meant, so I Googled ‘what is the meaning of a fascinator?’”

Although Priyanka’s wedding guest outfit will be revealed in a few hours,we have no doubt that she will wow us once more, in whatever she decides to wear. The Quantico star is set to join some 600 guests at Saturday’s ceremony, which will be attended by royals, dignitaries, celebrities and socialites from across the world.

Here’s a quick revision on how they met, what they have said about each other and more:

The Bollywood star and the American actor first met in January 2016 at Elle’s 6th Annual Women in TV Celebration. They met at the party which was also attended by Viola Davis, Olivia Wilde and more. The two hit it off instantly. “We bonded as actors. We just became friends, like two girls would,” Priyanka told People magazine in 2017.

Meghan then interviewed Priyanka for her now-defunct lifestyle blog, The Tig. Soon, they became good friends and started hanging out regularly. They watched Hamilton together, enjoyed drinks by swimming pools in Malibu and clicked a lot of selfies. While a few pictures from this phase can still be found online on Priyanka’s Instagram, others were lost when Meghan’s Instagram profile was deactivated after she got engaged to Prince Harry in November 2017.

Before the engagement was announced and when Harry and Meghan were being spotted together by the paparazzi, even Priyanka started getting bombarded by curious questions about her friend and her prince. In May 2017, she was asked by Wendy Williams on her show about ‘Prince Harry’s girlfriend,’ Priyanka didn’t hesitate in correcting her: “Also, Meghan Markle: actress, Suits, her achievements,” a gesture appreciated by both the actors’ fans.

The love, however, has not been one-sided. Meghan also talked about Priyanka with PTI in an interview. “I would love to work with her on a film one day! I told her specifically that my dream is to work with her on a Bollywood film, because I think it would be so much fun — she said I should do it,” she had said.

Priyanka also recently wrote a piece on Meghan for Time magazine as she featured in their list of 100 Most Influential and called her a ‘princess for the people.’