US offers to help rebuild N Korea economy if it denuclearizes 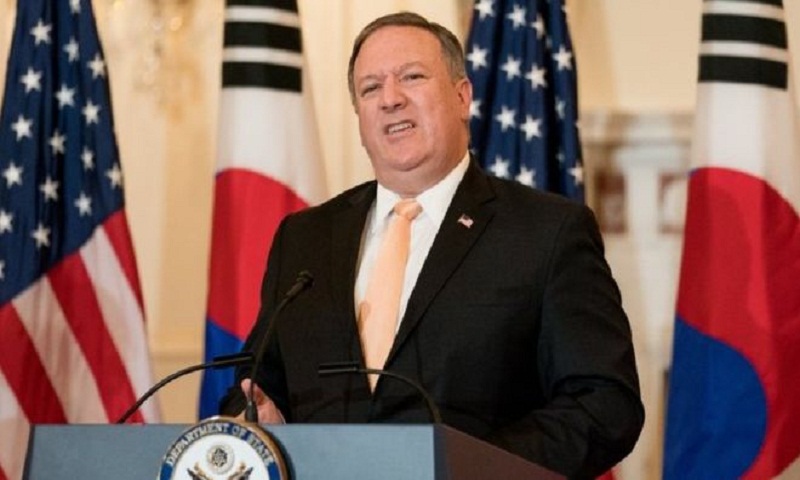 America will help rebuild North Korea's economy if it agrees to give up its nuclear weapons, US Secretary of State Mike Pompeo has said.

The US would be "prepared to work with North Korea to achieve prosperity on the par with our South Korean friends", he told reporters on Friday.

Mr Pompeo, who has just returned from Pyongyang, said he had "good" talks with North Korean leader Kim Jong-un.

Mr Kim and President Donald Trump will meet in Singapore on 12 June.

The two leaders, who had previously exchanged insults and threats, made the announcement after landmark talks between North and South Korea in April.

What did Mr Pompeo say?

"If chairman Kim chooses the right path, there is a future brimming with peace and prosperity for the North Korean people," he said after Friday's talks in Washington with South Korean Foreign Minister Kang Kyung-wha.

But he stressed that this would require a "robust verification" programme by the US and other nations.

During his surprise visit to North Korea this week, Pyongyang released three US detainees.

How do North and South Korean economies compare?

Daily life in the two countries couldn't be more different.

After the end of the Korean war in 1953 the South, an ally of the US, embraced a capitalist philosophy. It has developed into one of Asia's most affluent nations.

A government-sponsored industrial push in the 1960s led to huge corporations like Samsung and Hyundai being created.

By contrast, North Korea's GDP is less than $20bn, placing it well outside the top 100 economies.

It has a communist system, but capitalism is creeping into the country.

There are things to buy - but only for some people, those who have money. The majority of people in North Korea live in poverty.

Kim Jong-un has made clear that development is a priority.