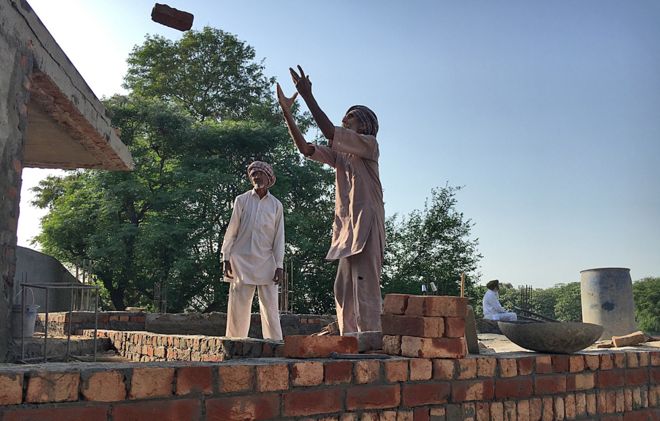 India's religious groups have so often clashed, with recent years marred by violence. But a remarkable gesture has helped foster a rare harmony in one village.

As mason Nazim "Raja" Khan toiled over the construction of a Shiva temple in a Punjab village, a thought nagged at him.

There he was, a Muslim, building a Hindu temple. Yet there was no mosque nearby where he could worship.

"We had no place where we could offer namaz (prayers)," says the 40-year-old. "It wasn't nice for our relatives when they visited."

It rankled, so he raised it with the 400-strong Muslim community in his village of Moom, in rural north India. But they were too poor to afford the land.

'Would you give us some land?'

Most Muslims in the area do unskilled jobs, such as casual construction work, while the community's 400 or so Hindus and some 4,000 Sikhs are relatively well-off.

Earlier this year, he approached the temple administrators and told them: "You Hindus will soon have your new temple. And you already have an older one. But we Muslims have no place to worship, nor money to buy land. Would you give us a small area of your land?"

A week later, he had an answer. The temple management had decided to hand over nearly 900 sq ft (83 sq m) of vacant land next to their temple.

"I was ecstatic," says Raja. "I just couldn't find the words to express my gratitude."

Purshottam Lal, an ayurvedic medicine practitioner who sits on the temple management panel, explains: "It was a very genuine demand. It was unfair that while we all share our joys and sorrows together, [the Muslims] didn't have a mosque."

Two months on, Raja and a few other masons and labourers are happily building a place where Muslims can worship.

The Sikh community is contributing funds for the mosque, which shares its wall with their gurdwara, making for a rare example of communal harmony between the three religions in a land where minorities often complain about victimisation.

In recent times, human rights groups have criticised the rise of what they see as an ultra-right Hindu nationalist government. Many say it has created an atmosphere of fear and mistrust between Hindus and Muslims.

However, in Moom, it seems the three communities live in a congenial atmosphere. There's no history of tension between them and people of all communities freely visit any place of worship.