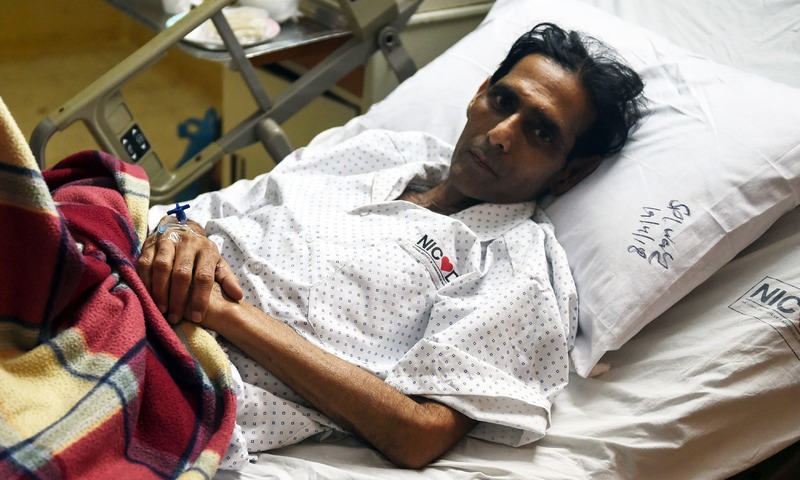 Pakistan’s World Cup winning hockey goalkeeper Mansoor Ahmed, a sporting icon in his country especially because of his record against India, could have an Indian heart beating inside him.

Less than a week after 49-year-old Ahmed, who needs a heart transplant, made an emotional plea to the Indian government to grant him visa on medical grounds, the Fortis Group of Hospitals has offered to register him for the transplant.

Fortis has also assured him that the entire treatment would be free of cost. Fortis has offered Ahmed, currently being treated at the Jinnah Postgraduate Medical Centre in Karachi for complications stemming from a pacemaker and stents in the heart, treatment at its hospitals in Mumbai and Chennai.

Ahmed has already made it clear that he was not looking for financial assistance; all he wanted was an Indian visa on medical grounds after his doctor, Choudhry Pervez, advised him to seek treatment in India. Ahmed and his doctor are banking on the Indian government’s sympathetic approach towards Pakistanis seeking treatment here.

Dr S Narayani, zonal director, Fortis (Mumbai) told Mumbai Mirror that the group will register Ahmed for a heart transplant in Mumbai and Chennai. “Once he gets a clearance from the government, we can get an assessment done to confirm whether he is fit enough to travel,” Dr Narayani said.

Several former India hockey stars, many of whom have played against Ahmed and who have gotten in touch with his family members after learning about his condition, said his health was “sinking”. Former India captain V Baskaran was quoted as saying that everyone concerned “needed to act fast”.

State health minister Dr Deepak Sawant said when it comes to saving lives, cross-border strife doesn’t matter. “We treat many foreign nationals. In this case, if the patient wants to be treated in India, I don’t see a problem,” Sawant said.

Ahmed, meanwhile, told Mirror that he was “overwhelmed by the love received from India”. “Not just the Indian stars I played against, but people from India who I didn’t even know, have said they’ll support me. I’m now waiting for the visa to come through. I’m sure the Indian government will oblige,” he said.

Even if Mansoor Ahmed is granted medical visa, he’ll have to brace for a long wait, as a heart can be donated to a foreign national only when there are no Indians on the waiting list. It takes anywhere between four and six months for a foreign national to find a donor heart in India, and the hospital carrying out such a transplant has to submit an undertaking that no Indian national was overlooked in favour of the foreign national.