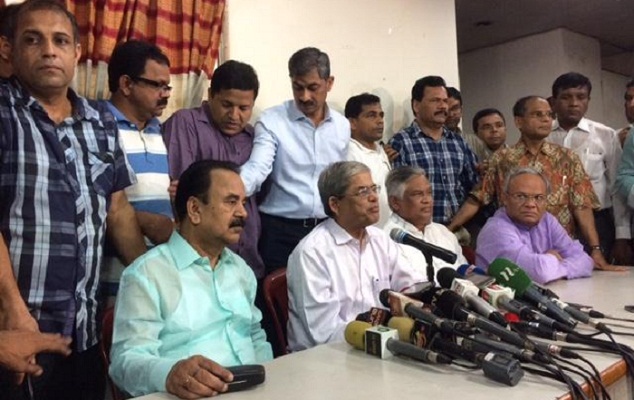 The British Home Office's forwarding letter presented by the state minister for foreign affairs Tarique Rahman's passport is 'mysterious and unusual' as there were 13 'major mistakes' in it, BNP told.

"You've probably noticed the British Home Office's letter (presented by M Shahriar Alam). There're 13 major mistakes in it, and it's unusual for the British government to make such mistakes," Mirza Fakhrul said.

About the mistakes, he said the letter mentions 'Bangladeshi Embassy' in the letter which should have written as the High Commission of Bangladesh.

There are also some wrong uses of punctuations where the address of the department is written, he said, adding that the phone and fax numbers were mentioned in bold letters which is unusual. "The letters of the department doesn't usually contain such numbers."

It the letter, Fakhrul said it was written 28 Queens Gate as the address of the Bangladesh High Commission, but it will be Queen's Gate. "The next one is very interesting as it is mentioned in the letter Dear Sirs which should be Dear Sir," he added.

The BNP leader said though the names of four persons were mentioned in the reference line of the letter, it was stated at the bottom line that 'Please find enclosed a Passport for your retention'.

He said the name of the person who put signature in the letter is missing which is also unusual.

"This letter is a mysterious one as it is full of errors. Our acting chairman's lawyer is trying to know details about the letter, and we'll let you know about it later," Fakhrul said.

Tarique's lawyer Kayser Kamal said no important document, including the passport, of an asylum seeker can be given to any third party as per section 17 of the British Asylum law.

"So, the state minister's assertion that Tarique Rahman's passport was submitted to the Bangladesh High Commission, London is suspicious as it shouldn't remain there as per British rules," he added.

Addressing a reception hosted by the UK Awami League in honour of Prime Minister Sheikh Hasina in London on Sunday, Shahriar had said Tarique, living in London, gave up his nationality by handing over his Bangladesh passport to the UK Home Office almost four years ago.

As BNP challenged him, Shahriar held a press conference at his Gulshan residence on Monday evening where he presented some documents, including a forwarding letter of British Home Office about retention of Tarique's passport in the Bangladesh High Commission, in support of his remark.