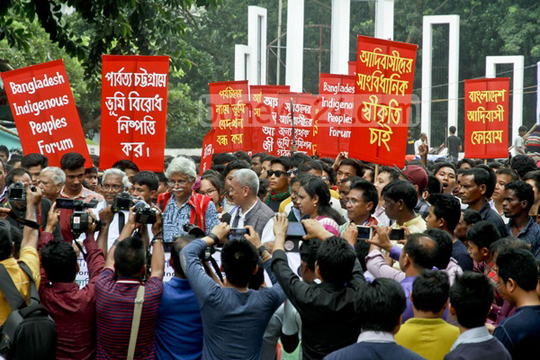 Though indigenous peoples started their movements for existence centuries ago, vibrant and noteworthy international indigenous peoples’ movement in the 1970s was driven primarily by groups from areas of European invasion and settlement. Global native rights movement has been spearheaded by residents of the northern hemisphere commonwealth countries and the Scandinavian countries have also come into this core group of Western Europe and others.

This article is a pointer to the development of indigenous movements in the modern world.

The aftermath of First World War can be seen as an important period in the development of internationalism and a perspective in which some of today’s “indigenous peoples” became visible as disadvantaged minorities in various frameworks. Investigations within the International Labour Organisation (ILO) made the ground for broad based, internationalist attention to labour, human rights, and land-rights deficits. Concurrently, however, structures of internationalism were both advanced and constrained by power relations among nation-states.

In 1974 and 1975, the first international indigenous organisations, the International Indian Treaty Council and the World Council of Indigenous Peoples (WCIP), were founded in the United States and Canada. The founding of the WCIP in 1975 was at the initiative of George Manuel of the National Indian Brotherhood of Canada partly in reaction to the Trudeau government’s promulgation of a white paper proposing the elimination of Indian status and repeal of the Indian Act.

The 1977 UN NGO Conference on Discrimination against Indigenous Populations was the first formal UN forum attended by indigenous representatives. At the United Nations in 1982, the formation of the Working Group on Indigenous Populations, following a long period, had succeeded in defining “indigenous populations” as a category distinct from minorities and this can be termed as a milestone in the internationalisation of the movements.

Representatives to the new body were appointed from membership of the Economic and Social Council’s Sub-Commission on Prevention of Discrimination and Protection of Minorities, one from each of five world regions - Africa, Asia, Eastern Europe, Latin America, and “Western Europe and others.” The International Indian Treaty Council (generally identified as the diplomatic arm of the American Indian Movement) and WCIP were the first indigenous NGOs to gain consultative status within the United Nations.

Others were the Inuit Circumpolar Conference, the Indian Council of South America (formed from within the WCIP but attained separate status), the Nordic Sami Council, the Indian Law Resource Centre in Washington, DC, the National Indian Youth Council (United States), the National Aboriginal and Torres Strait Islander Legal Services Secretariat (Australia), the Grand Council of the Cree (Quebec, the first single-tribe group to apply for NGO status), the Four Directions Council (comprised of four Indian delegations who met in Geneva), and a very small group called Indigenous World.

The early internationalist extension of the indigenous category - especially to Amazonian and other forest-dwelling groups of South America - was partly achieved through environmentalist activism and was rather successful in terms of gaining media attention and international support. Interestingly, the first Asian representatives to the WCIP came from the Chittagong Hill Tracts and the Philippines, followed by representatives from West Papua and the South Moluccas, the Karen and Kachin from Burma, the Nagas and the Adivasi from India, and the Ainu from Japan.

Australia appeared significantly in the set of early participants in international and UN indigenous affairs. The WCIP held its third general assembly in Canberra in 1981 and examined a range of reports on issues from Canada, Scandinavia, Greenland, Chile, Bolivia, and North America. However, Latin American countries were not much ahead in internationalisation. The term indı´gena (a much more ordinary-sounding one in Spanish) had a long history of use throughout Spanish America, but in many places it stood for not simply previous belonging but inferior, native status, overlapping with indio.

At long last, on September 13, 2007, a UN Declaration on the Rights of Indigenous Peoples, some 30 years in the making, was put to the vote. The thrust behind the declaration was to create an international instrument that would frame and reinforce the rights of “indigenous peoples,” setting yardsticks for change in domestic regimes. This was adopted by 143 nations, with 11 abstentions and rejections from four voting states: the United States, New Zealand, Australia, and Canada.

The Declaration can also serve as a standard-setting resolution of profound significance as it reflects a wide consensus at the global level on the minimum content of the rights of indigenous peoples. It has the potential to be used as remedial tool as it addresses the need to overcome and repair the historical denial of the fundamental human rights of indigenous peoples, and affirms their equality to all other members of society. On a global scale, a consciousness regarding this Declaration is also on the increase and the indigenous peoples have found something truly significant in it.

In fact, indigenous peoples’ movement outshines other social movements in many respects. The indigenous peoples have struggled against colonisation for more than 500 years and continue their struggles against forms of colonisation and racism. At the same time, they have been receptive, too. They continue to build and rebuild their communities and practise their cultural values of collectivity, solidarity with nature, and reciprocity even in the face of serious challenges. Many still fight to protect their territories, which makes their movement different from others.