Cooperation from All Corners Needed to Resolve Rohingya Crisis 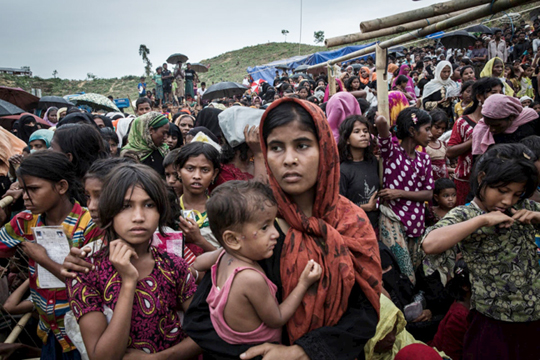 When visiting Amnesty International Secretary General Salil Shetty met Prime Minister Sheikh Hasina at Gonobhaban on 5th April, she said that there is no visible progress in the repatriation of the Rohingyas despite signing of the Memorandum of Understanding between the two countries. She has also informed that biometric registration of the Rohingyas has been completed after proper identification and temporary shelters are being built for them at Bhashan Char.

On the other hand, Salil Shetty said that Myanmar must take back the Rohingyas ensuring their full security and protection. However, he emphasised the need for more public campaign and pressure in favour of Rohingya people.

The latest addition is the visit of the Myanmar Minister for Social Welfare, Relief and Resettlement Win Myat Aye to Bangladesh. He has visited Rohingya camps in Cox’s Bazar on 11 April and hold meetings with the Foreign Minister and the Home Minister of Bangladesh the next day. However, it seems to me that we should not expect something positive from this visit. Let’s see whether his visit can, at least, create our trust on Myanmar.

Bangladesh and UNHCR have signed a document on 12th April regarding the involvement of UNHCR in the Rohingya repatriation process. It is also learnt that a delegation from the UN Security Council would be coming to Bangladesh very soon to visit the Rohingya camps as well as discuss the issue with the concerned authorities of Bangladesh.

We know that the Rohingya population of the Rakhine State of Myanmar came under inhuman atrocities of the Myanmar military in consequence of the killing of some members of the police force on 9 October 2016. They were forced to enter Bangladesh to save their lives. They were coming every day, but not much in number. But, on 24th August last year, when the torture of the Myanmar military on Rohingyas reached to ‘genocide’, thousands of Rohingyas started entering Bangladesh every day. Their number has already exceeded a million. Though, a few in number, but Rohingyas are still coming. There are also several hundred thousand Rohingyas who came earlier.

Bangladesh has been working relentlessly to solve the Rohingya problem, as well as the people around the world have been raising their voices. The United Nations Security Council has taken several steps, but could not reach to any resolution due to China and Russia and thus failed to put any restriction on Myanmar to stop these heinous activities. Various international and regional organisations also did not dare to extend help and assistance for the Rohingyas. Leaders and organisations of many countries have also visited Rohingya camps in Bangladesh. Many people have also distributed relief materials among the Rohingyas.

The ‘physical arrangement’ document was signed in January this year following the Memorandum of Understanding on the Repatriation of Rohingya signed between Bangladesh and Myanmar on 23 November 2017. Four months have already passed, but nothing is visible about the repatriation process. Almost all the names of the Rohingyas from the list so far provided by Bangladesh for repatriation are rejected by Myanmar. That means those Rohingyas are not Myanmar nationals. Then, they are citizens of which country? Has Bangladesh included Bangladeshi people in those lists? How can Myanmar think like that? Perhaps, they have other reasons behind.

Bangladesh will continue sending lists for Myanmar’s approval and they might reject 80%-90% names of the Rohingyas from those lists. It might be seen that Myanmar would finally approve only 2 to 3 hundred thousand Rohingyas for repatriation to Myanmar out of one million. The rest will continue to stay in Bangladesh. And since Rohingyas are still coming, no one can guarantee that the number will not exceed again one million. Above all, nobody knows, except Myanmar, how many years it will take to finish the process once the repatriation will start. They would try, with all their means, to linger the repatriation process. They believe that Russia and China would assist them and no pressure will be able to force Myanmar to take back the Rohingyas.

Canada and the Philippines have already expressed their desire to take some of the Rohingyas, other countries like Malaysia and Turkey may also like to take. Many people are talking about the advantages and disadvantages of the rehabilitation of Rohingya in third countries. It will not be possible for Bangladesh to provide permanent settlement of such huge number of Rohingyas in Bangladesh. If they cannot return to Myanmar, then where will these people go? There must be some arrangements for them. However, the issue of their rehabilitation in any third country should be examined deeply in order to avoid any complexity in the future.

In fact, we see the same picture like our Hon’ble Prime Minister. It means the repatriation of Rohingya will not be an easy task as we think of. Actually, Myanmar is not sincere in taking back the Rohingyas. Otherwise, we would have already seen some progress in the repatriation process. They are trying to linger the process of repatriation in various means. The future might tell more of their games with the repatriation process. There is reason enough to suspect whether Myanmar will, at all, take back these one million Rohingyas. Even, if Myanmar agrees to take back their recognised nationals following the present verification system, 2 or 3 hundred thousand out of one million Rohingyas might be able to return in 10 to 12 years.

However, the overall situation predicts that the crisis can take a different turn only, if Russia & China could be convinced and be engaged in our efforts to pressurise Myanmar in taking back the Rohingyas. If Russia & China support any resolution (or abstain) proposed by the UN Security Council, then this crisis would be easier to resolve. It is to be noted that Russia, supporting Myanmar like China, did not endorse any proposal of the Security Council. However, considering the latest development in Bangladesh’s relationship with Russia, there might be enough scope to convince Russia to support the repatriation process. But, the dealings might differ in case of China.

Recognising the existing reality of the issue, the only and last way is to convince China and Russia. And for that, in addition to the ongoing bilateral and multilateral diplomatic efforts of our Government, ‘leader-leader contact‘ diplomacy might bring positive results. In that case, the initiative would be based on the personal relationship of Prime Minister Sheikh Hasina with the top leaders of these two countries. However, we should deal these two counties in different ways considering our bilateral friendship as well as political and economic perspectives of the world. I believe that using these three means together, it might not be very difficult to make understand China and Russia the gravity of the crisis and convince them. As a result, sending of Rohingyas to Myanmar will not only be possible, but will be easier and secured.

The writer is a former Secretary and Ambassador