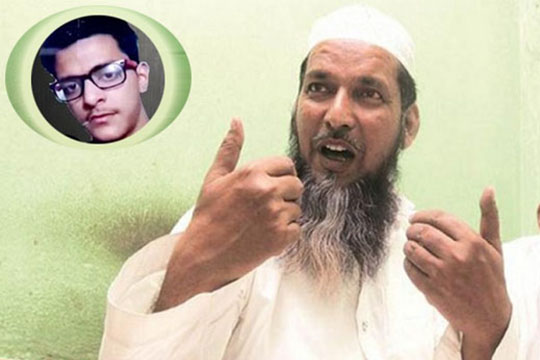 By any standard it was not an easy task to stand before one’s own son’s coffin and  appeal to a big crowd that have gathered for the Namaz-e-Janaza of the son to be calm and not cry for revenge because his son was killed by some religious bigots. The man Muhammad Imdadullah whose son lay in the coffin was the Imam of a local mosque in Asansol, India.

Asansol is also known as the ‘City of Brotherhood’ and the birth place of our Jatiya Kabi Kazi Nazrul Islam and is the second largest city of Paschimbanga after Kolkata, the city being the district headquarter of Paschim Bardhaman district. Asansol is proud of being one of the main industrial hubs of Paschimbanga and its Chittaranjan Locomotive Works is one of the largest locomotive manufacturing units in the world, being also the largest employer of the district.  The nickname ‘City of Brotherhood’ comes from the peace and harmony that prevails amongst the people living in the city for generations. The city has a sizeable number of Muslim populations, mostly low or middle income and though there has been some communal tensions earlier in Asansol due to incidents in other parts of India, the city and the adjoining areas have remained without any communal conflict. When the Muezzin called the faithful for prayers, the Mandir Purohits made preparations for their evening puja and Church bells asked the Christians to come to the Church to pray to the Lord and in Gurdwaras the Sikhs chanted ‘Jap Nam Sat Nam’.   Communal tensions or rioting in the sub-continent is one of the dirtiest gifts to colonial India by the British. It was part of their declared policy of ‘divide and rule’ and the policy paid a rich dividend to the British Raj for about two hundred years of their rule in the sub-continent. While people remained divided, they ruled and plundered.

The only time I had visited Asansol was in 2016 when the lone university of Asansol, Kabi Nazrul Islam University invited me to be the Convocation Speaker in their first convocation. I felt honoured for this prestigious offer. The university was established in 2012 by the Paschimbanga government when Mamata Banerjee took over as the Chief Minister of the State and like most public universities in India Kabi Nazrul University also admits only post-graduate students focusing on liberal arts subjects though the university also offers some courses in basic science. By train it is about four hours journey from Howrah and by road it can be anywhere between four to six hours depending on the traffic. The Vice-chancellor of the university Dr. Sadhan Chakraborty received me very warmly. He seemed to be a very soft spoken gentleman taught Philosophy at Jadavpur University before joining Kabi Nazrul University. During my two day stay at the University I made quite a few friends with whom I still maintain warm relationship. In the convocation were also present some invited guests from the Asansol and adjoining areas and talking to them it seemed that they had a very high opinion about the Bangladesh’s Prime Minister Sk. Hasina who visited Churilia, the birth place of our National Poet Kazi Nazrul  in 1998. Churilia is about seventeen kilometres from the Asansol city and it takes about forty five minutes drive time to reach there. Before her coming, the place got a face lift and dilapidated roads got repaired. The Paschimbanga government provided her with a helicopter to go to Asansol. This year the university has decided to honour her with an Honorary D.Lit degree in a special convocation.  When I entered the city at around 10.00 pm the streets were near empty but I was greeted with a big bill board saying ‘Welcome to the City of Brotherhood.’ Suddenly that bondage and peace was pierced by a series of communal skirmishes between the people in Raniganj, which is also known for its rich coal mines. Raniganj is just outside of Asansol and on March 26, the day of Sanatan Dharma’s Ram Navami procession and celebration, some overzealous religious bigots decided to carry sharp weapons and while crossing the Muslim area there were intimidation and provocative slogans that triggered unfortunate communal tensions leading to skirmishes and rioting shattering the decade long brotherhood that existed amongst the people of all faiths in Asansol and the adjoining areas that continued till the next day. Properties were attacked, police and innocent people attacked and beaten and as in most such incidents across the Indian Sub-continent including Bangladesh, the roots of such heinous communal frenzy and disturbance were identified by main-stream Indian Media and saner section of the people to goons belonging to political parties who have always used religion for their personal and political gains and used the ignorant people to create such crimes against humanity. As usual, the perpetrators use rumours and half truths to force the people to join their ranks. The incidents in Raniganj and Asansol were no different.

Sibtullah Rashidi (17), the son of the Imam Muhammad Imdadullah who appeared at this year’s school leaving exam, did not return home on March 27. The family was worried and for next two days searched for him. Finally he was discovered in the hospital morgue by the Imam, hacked to death by some bigots and unknown thugs. From the available sources, Sibtullah was just one of those who happened to be in the wrong place in wrong time and had to pay a high price. He was the younger of the two siblings and the Imam Imdadullah had lots of hopes for his son, all now shattered to pieces. The Imam realising that as soon as his son’s death news is made public the situation may turn from bad to worse causing more loss of innocent lives and property and further damaging the peace and harmony of the city and the district. Leaving his son in the morgue the Imam as a true believer in the teaching of the Holy Prophet (pbuh) went out with a microphone and himself announced that his son has been found, dead, and he appealed to the people of the city that no one should think of taking any revenge of his son’s death in rioting and no parents should again lose any of their children in the name of religion. The locals were just not only stunned at the sagacity of the Imam and praised how tolerant one simple Imam could be but still some young Muslims were not very convinced and fumed at the incident but again the Imam calmed them down just before the Namaz-e-Janaza of his son which he led. Before the Janaza he took the microphone and in teary eyes and choked voice said, ‘Friends, my child has lived so long as Allah had granted him life. He is no more with us as the Creator has decided so. Those responsible for killing him will be tried by Allah on the final judgment day and no one present here has the right to avenge my son’s death and no one should assault another man for my son’s untimely demise. No person should be killed, no property damaged and any arson committed. Islam has not taught us to kill another human being. It has taught us to live as neighbours in peace in harmony (he was perhaps refereeing to the Charter of Medina). I have lived here for last thirty years as one of you. If you think I am one of your own, take me as your brother, then please maintain peace at all cost as Islam has taught us. It is your sacred duty. If you fail to do this I will think you have not taken me as your own. If so, I will leave Asansol forever.’ By the time the Imam finished, all those gathered for the Janaza were weeping like children. The Imam then turned towards Kaba with his dead son’s mortal body in front and sounded ‘Allahu Akbar’ beginning the Janaza.

Most of the India’s liberal media covered the incident on its front page and told the nation how a bereaved father in a distant district of Asansol keeping his dead son in front of him in his eight-minute long sermon to the gathered emotion charged people have not only saved Asansol from further communal violence but also saved the entire nation.

Imam Imdadullah has proved that it takes a bunch of idiots and goons to disturb the peace of a community but one learned Imam who interprets the real teaching of the Prophet or some other great man can ensure peace and harmony to an entire nation. Let alone Islam, no religion ever preached revenge, animosity and killing of the innocent for any reason whatsoever. The Prophet of Islam (pbuh) during his life time was attacked many a times by those who opposed his teaching but never ever the great Prophet thought of taking revenge for such misdeeds. Unfortunately it is only the half educated Mullahs who preach hatred to the common people and such self styled religious leaders abound in all faiths. Some Indian media paying tribute to Imam Imdadullah for his humane qualities wrote, ‘Imam Tujey Salam.’ Imam Imdadullah ‘Tujey Salam.’ Islam is grateful to this great soul. Let us pray for his son Sibtullah Rashidi. May Allah grant him eternal peace in Jannat and sanity return to those who use religion for political and personal gains.