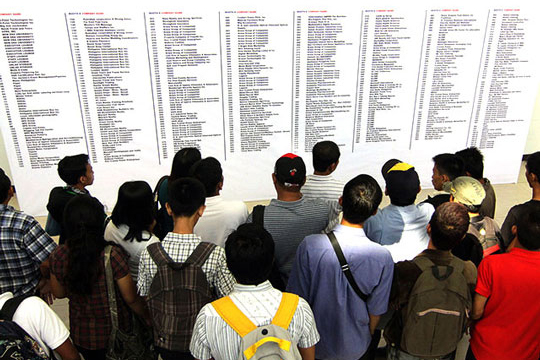 It is quite an unfortunate phenomenon that while many sidelined issues are coming up in the limelight of the media coverage, one of the potentially core problems like the problem of joblessness or unemployment is, for reasons unknown, being less addressed or being left neglected. Whatever causes may be there, such a massive wastage of huge potential human resources cannot be an issue of low profile.

It is outrageously disappointing that instead of creating job vacancies and opportunities for the new entrants in the job markets, the scopes and the peripheries in job market are getting growingly limited with no master plan or vision to address this alarming problem in a manageably pragmatic setting.

Mahatab has just turned up for a viva-voce test being taken to pick up only one candidate to fill up the position of a lecturer from a list of 20 eligible candidates who have been selected through a written test beating down some 120 candidates. Having quite an enviable GPA and CGPA, Mahatab further tells that it is his 7th viva in the row since he had completed his masters back in 2015. A status holder of the lower middle class background, Mahabub appeared seriously worried about his present fate and his looming future. The hectic pressure of the highly qualified jobless people is clearly felt from the single episode stated above.

There are 28 lakh unemployed people across the country. Among them 19.39 lakhs are from the rural areas and 8.51 lakhs from urban areas. To make employment scenarios still worse, fresh figures are being added to the existing one. The average number of jobless people if counted in percentage at this moment approximately stands at 4.25 per cent. It categorically means that out of one hundred people around 5 young, energetic and capable persons are not connected to the sources of income and earnings. Agriculture sector provides for the highest 42.7 per cent followed by service sector making up 36.9 per cent and the remaining percentage is covered by other sectors. It is important to note that around 40 per cent of the population is underemployed meaning that they are employed for a few hours of a week at low wages.

The agonies and the sufferings experienced by the jobless people vary from class to class. But one universally common point is that they have to undergo an excruciating pain of letting themselves down before others as far as the question of social identity is concerned. Unlike Mahatab, Sajid comes of quite a solvent family. He has done his masters from a renowned private university back in 2017 but yet to manage a job on his own. Although his father owns a posh business firm, Sajid wants to make an independent start in his career. Despite good result, Sajid has been ceaselessly taking job exams one after another but yet to settle in the positions as they are, he goes on, in most cases pre-determined. He ruefully asserts that he can easily manage a high profile job once he uses the identity and the back-up of his father.

In fact, job opportunities are not only limited but their distributions are manipulated and misdirected. Faced by this crooked reality, talent and result have little to do to help a candidate manage a job. Being caught in the quick sand of unemployment and underemployment, overwhelmingly huge number of potentially promising human resources are being lost unevaluated and untapped who are quite capable of proving their worth in the nation building activities once they are given scopes. Because of corrupt, manipulated and partisan selection procedure, both in public and private sectors, deserving and qualified candidates are being deprived to a great extent of getting due positions which is why incompetent people have been installed in the offices quite unbefitting for them.

At present 5 university educated bona fide young people out of 10 are fulltime unemployed ones. The statistics will sound a little bit more staggering when another research finding states that out of 5 employed persons only 3 persons are fully employed and the remaining 2 persons are either underemployed or part time job holders.

The same survey report reveals that prospects for new jobs especially for the university educated people are bleaker in the foreseeable future. Even more hugely extensive unemployment prevails among the illiterate and half-educated people in the rural areas. As a direct impact of widespread river erosion, non-agricultural uses of land and the mechanisation of agriculture, job generating opportunities in agriculture are fast shrinking in rural areas.

Job generation in service sector especially in public sector is strictly limited. Compared to the public sector, the performance of the private sector is highly appreciable in generating new jobs. According to another survey, 80 per cent jobs are provided by the private sectors with a wide variety of trades and positions ranging from field workers to officers.

Self-employment is obviously an option to be tried in addressing the menacing unemployment. But creating jobs and distributing them fairly among the deserving people of the republic is an avowed commitment of the government and the government will have to try its utmost to create more jobs. Alongside establishing more and more viable industries especially agro-based industries on unused government properties, the government must encourage and supply all necessary inputs to the potential entrepreneurs to set up more agro-based industries. All preparations in this direction must be completed before the tears of the jobless million explode into a social catastrophe.