All News May Not Be Good News 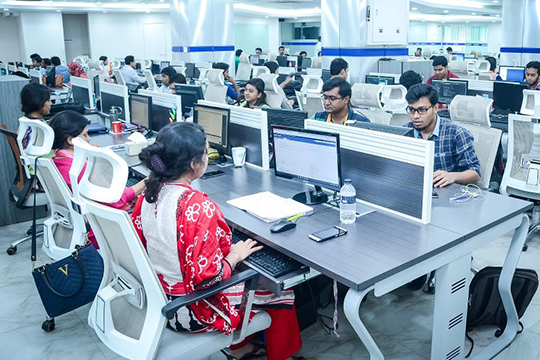 Within more than four decades of Bangladesh’s independence the country has not only survived, it has became one of the leading growth models amongst the once branded ‘third world countries.’ At birth not many experts and economists saw any future of this war devastated country.  Even certain superpowers have tried their best to make the country not only a failed state but a ‘collapsed nation.’ However, over the last four decades the people of this country have proved that if they can shed their blood for the creation of their country they can also make it viable.

Once the US Secretary of State Henry Kissinger  who opposed as a matter of his country’s state policy the birth of Bangladesh even termed this country as a ‘basket case’ meaning no amount of aid and assistance can save this country from its doomed destiny. Proving him completely wrong today Bangladesh is amongst the top fastest growing economies in the world expected to move  up to the 28th position by 2030 according to a global think tank and world’s one of the largest professional service firms PricewaterhouseCoopers (PwC).

The report ranked 32 countries by their projected global gross domestic product by purchasing power parity (PPP). Bangladesh ranked 31st among the world’s 32 largest economies in 2018, that together account for around 85 per cent of global GDP. Finding by the PwC show that China, India and US would be at the top of the table. During this period, Bangladesh is expected to see impressive growth that will push it to the 23rd place by 2050. Bangladesh, India and Vietnam have the potential to be the fastest growing economies between 2016 and 2050.

The economic output of Bangladesh could grow from US$ 628 billion in 2016 to US$ 1.3 trillion in 2030. But realising Bangladesh’s growth potential depends on sustained investment reform and eradication of corruption and downsizing the unnecessary bureaucracy. Recently the United Nations have acknowledged the socio-economic growth trend of Bangladesh and announced that it has graduated from the LDC status to the status of a developing country. The country celebrated the achievement with big fanfare but all experts cautioned that the tasks ahead will be more difficult than what has been achieved over last four decades. Not only the trend has to be maintained new benchmarks will also have to be met.

The news so far has surely been good but what can dilute all the achievements of the people and country is the increasing curse of unemployment. According to the Bangladesh Bureau of Statistics  currently 4.3 per cent of people in Bangladesh are unemployed the same as in US (4.4) but what is quite disturbing is 47 per cent of Bangladesh’s unemployed are certificate or degree holders meaning that they have had formal high school or university education.  Bangladesh is ranked 12th in the global unemployment index in terms of ‘educated’ unemployment. According to the recent report of the Bangladesh Bureau of Statistics employment growth rate in the industrial sector in the fiscal year 2016-17 as it did in the previous year and such trend may continue in the foreseeable future as industries are becoming less and less dependent on technology than human labour.

This is happening throughout the world as labour cost keeps on rising and labour dependent productivity keeps on declining and in an age of hyper competition to take goods and services to the consumers besides ensuring quality the other important issue that decides as to who controls survives in the hyper competitive market is the price and quick availability of the product and the service. Let us take the example of the Jacquard machine which was invented by Joseph Marie Jacquard in 1804. This machine is probably one of the most important weaving inventions as the machine made it possible the automatic production of unlimited varieties of pattern weaving. It was used extensively in Europe to enhance the productivity of textile industry in Europe in the early nineteenth century after the first industrial revolution of Europe. But over next century it lost its charm and attraction as bonded labour in the name of cheap labour was available in the European colonies of Asia and Africa. Currently the long lost machine has made a comeback with a big bang in many countries, including Bangladesh in redesigned form with better capability and efficiency. It now can be used not only in textile industry but also in the readymade garments sector for cutting, designing, weaving and stitching. The machine can be used for unlimited hours with proper maintenance and is able to give a better output than a regular worker. This means currently about four million workers are employed in the garments sector and because of introduction of such a technology first there will be stagnation in the growth of employment in this sector and then the usual trend will be a decline.

To make things even worse in the traditional employment scenario due to inadequate availability of agriculture labour Bangladesh and many agricultural dependent countries are fast mechanizing this sector which begins from tilling the land and sowing of seeds or saplings and  continues to harvesting and milling. While the share of employment in industrial and agriculture sector keeps on dropping the service sector keeps on adding new jobs and ironically most of the unemployed youths of the country are not prepared to face the new reality that a mere degree will not guarantee any job opening unless new skills are learnt and art of application is mastered.

Currently there is a demand from university graduates that government relax the entry point in government service and the age bar be move up to 35 years and remove the quota system for government jobs. First the government should not be thought of the only source of jobs for the country’s  young workforce. The private sector employs more people than the public sector (excluding those employed in the defence and law enforcing agencies). While these unemployed youths are clamouring on the streets officially there at least six hundred thousand foreigners working in Bangladesh’s selected sectors, especially in textile, pharmaceuticals, readymade garments, IT, aviation and  consultancy. The largest of them comes from our neighbouring country India and annually these six hundred thousand remit to their countries about six billion US dollars while our ten million expatriate workers remitted fifteen million dollars back home in 2017. Most of the Bangladeshi expatriate workers are unskilled or semi skilled while in most of the Middle Eastern and Arab countries, Korea, Europe or Australia the high paying jobs are taken by Filipinos, Indians, Indonesians, Malaysians, Pakistanis, Sri Lankans and even people from Nepal.

The Bangladesh Bureau of Statistics also gives us a bleak picture when it says 1.4  million new faces entered  job market between 2015-16 and 2016-17 taking the total number of unemployed (including underemployed) workforce to 6.35 crore, more than a third of country’s population. Even if the government relaxes the age bar and reforms the quota system for employment in the government jobs the problem will not disappear as the reality is that many of the unemployed youths are unemployed because they are unemployable as they lack the skills to perform and attitude to learn.

Unfortunately they are the products of our education and social system. Ask a young person what they would like to be once they finish their schooling, most will answer they will want to enter a job and not be an entrepreneur. They love to be an employee rather than an employer. They are averse towards taking risk and would feel safe to work behind closed doors rather than walk the fields and factories. A pharmacist should be in a pharmaceutical factory rather than be in the marketing department. But in actual case that is exactly what happens.  A graduate spends huge amount of time and public money to become an engineer or an agriculturist or even a doctor but given a chance  many of them  would like to government service whether be it police or administration.

Today there are 3.2 million students studying in the tertiary level in Bangladesh. After graduating they will come out with a degree and search for a job but will find the world much more competitive than they imagined. They will realise that certificates will not ensure jobs; skills and attitudes may. So if some sort of skills are built in their curriculum their chances of survival in the job market will be much better. The question often asked can Bangladesh afford to send so many young people to general education and convert them into ‘educated unemployed.’ Even without answering the question what is currently needed is the increase in the number of technical and vocational training institutes and setting up of specialise institutions to train and educate people who will be capable of taking charge of upcoming sectors like textiles, IT, shipbuilding, pharmaceuticals, energy, telecommunication, healthcare, food processing, fashion designing. In the recent times because of the concerted effort of the government the scenario is changing marginally.

Currently 14 per cent of those who pass their Higher Secondary enter technical education. This is a good sign. Because of rising production costs many industrially developed countries will be looking for destinations to relocate their production facilities that will also provide the protection of their capital and provide the needed human resources. Bangladesh can be chosen as a destination if it takes a proactive decision to reform its education system, put more emphasis on skill development instead of just a certificate driven education. Bangladesh, a country of one hundred and sixteen million people, can boast of having 42 per cent of its population below the age of 24. To take advantage of the situation we just need to foresee the immediate future, prepare our huge pool of young people and transform them into useful workforce and proper human resource with right type skill and attitude to  learn. No resource can be more valuable than human resource. If done, that will be the day when we will be able to say ‘All news is good news.’