Hitherto, an Australia-bound traveller on QF10 would be strapped in for landing at the UAE airport, followed by an hour of disconsolate duty-free shopping in the middle of the night while the plane was refuelled for the onward flight to Melbourne.

Instead, QF10 flew directly over Dubai Airport at 37,000 feet. The Boeing 787 Dreamliner would stay aloft for another 10 hours until it reached Perth, Western Australia.

Sunday 25 March 2018 has entered the aviation record books as the day the aviation landscape between the UK and Australia changed.

Qantas has replaced the daily Airbus A380 “SuperJumbo” from Heathrow to Melbourne with a much smaller Boeing 787 “Dreamliner” and changed the flight plan.

Instead of refuelling in the Gulf, the plane flies direct to Western Australia’s capital, with an official distance of 9,009 miles.

It is the first nonstop link between the UK and Australia. Thanks to a 1.15pm departure and an arrival at 1pm local time next day, passengers can have lunch in London, dinner and breakfast at altitude and lunch beside the Pacific.

The “nonstop hop”, scheduled to take 16 hours 45 minutes, is the culmination of almost a century of aviation between the UK and Australia. The first flight in 1919 took 28 days, 40 times longer than the new service.

The lunchtime departure of Qantas flight 10 was accompanied by celebrations at the gate at Heathrow, including someone dressed in a giant kangaroo suit.

All but a handful of the 236 seats on board were filled, which the airline hopes will long continue.

The length of the flight makes it an expensive operation. Even though the 787 is an efficient aircraft, a significant proportion of fuel is consumed carrying fuel for later in the flight. The crewing costs are also heavy. On shorter flights, the 787 operates with two pilots and 10 cabin crew. Because of the long flying time, two extra pilots and two additional cabin crew are carried to ensure all the personnel get some rest. 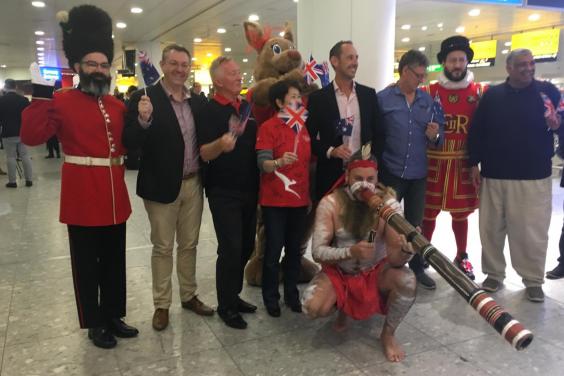