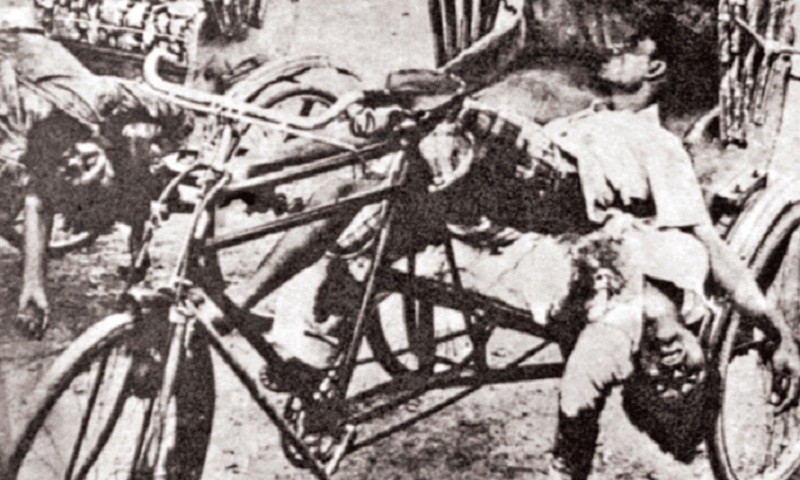 The truth is that killing innocent people is always wrong - and no argument or excuse, no matter how deeply believed, can ever make it right. No religion on earth condones the killing of innocent people; no faith tradition tolerates the random killing of our brothers and sisters on this earth.

The Pakistani goons and their mango-twigs who carried out the mass murders in Bangladesh in 1971, they must infer that there is no flag large enough to cover the shame of their killing of innocent people.

It is said that genocide is the responsibility of the entire world. Some scientists have even gone so far as to assert that genocide leads to the extinction of Neanderthal man or homo-sapiens boorish. It is a positive reinforcing stimulus that Bangladesh parliament on March 11, 2017 nem-con espoused a declaration stating emphatically and authoritatively that March 25 to be observed as the Genocide Day in the country. Now the country wants the UN to recognise the 1971 genocide globally, in commemoration to the barbarities carried out by the Pakistan’s army along with their local collaborators in the soil of Bangladesh on the same day in 1971. Bangladesh now would reach out to the UN for this purpose. From now onwards, the country will fete March 25 as “Genocide Day” all across the world.

I wish to tell confidentially that Bangladesh would have been liberated much earlier had the Bangla-speaking Pakistanis, especially, Jamaat-e-Islami goons not made the Pakistan’s army know the freedom-loving people and the scale of massacre of our people could have been reduced to a great extent. Because Pakistan’s military did not know the residents of freedom-loving people, the country’s villages, roads, highways, bridges, culverts, railway stations, … The Biharis or the non-Bengalis were aliens to us who came from a foreign country to our country and after participation of India in 1947, we welcomed them to our part of the land but they did never honour our gesticulates; they did never owe allegiance to this part of land belonged to us; instead, they thought it was their own land only like the Pakistanis; they always behaved with us very rudely; they posed to be our masters and treated with us as slaves; once the Pakistan’s army cracked on us down with full fury, they equally became monstrous to annihilate us from our own land whereas they should have coalesced with us as our people long before and treated us as their brothers and sisters and learnt Bangla to speak to us, but they forced us to speak to them in Urdu. I saw their ferocious nature long before 1971 and during our 1971 war.

Many Biharis or the non-Bengalis are still living in Bangladesh, but they do not recognise the country, Bangladesh; they still think that it is their country and it is a part of their beloved Pakistan, but the despicable Pakistanis are still not agreeable to take them to Pakistan. Rather, they consider them as treacherous people. I strongly believe had India along with our freedom fighters started a full-fledged war long before December 1971, Bangladesh would have come into being long back. I believe then all the misdeed-mongers could have been reduced to ashes long time back. And that should have happened in 1971.

Pakistan’s Military President Yahya Khan government’s double-faced or Janus-faced vicious game-bag full of zest or vigour zingy diddled and defrauded the whole caboodle nation or res-publica designedly happed most high-pitched in the guise of pretension in March 1971 with Bangabandhu Mujib and his lieutenants. Like the Nazi Holocaust, drunkard, philanderer, double-dealer and brute Yahya Khan and his clique including deceitful character and deft schemer like ZA Bhutto took Adolf Hitler’s philosophy of “final solution to the Jewish question” to decimate us in 1971. Jared Diamond has suggested that genocidal violence may have caused the Neanderthals to go extinct. Ronald Wright has also suggested such genocide or the systematic extermination of people on the basis of ethnicity, religion, political opinion, social status, etc.

Pakistan’s military junta, like Genghis Khan, was genocidal killers who were known to kill whole nations, leaving nothing but empty ruins and bones. They ordered the extermination of the Bengalis. So, their rule was genocide. If genocide is defined as a state-mandated effort to annihilate whole peoples, then their actions in this regard must certainly qualify. What they did deserve calling them “brutal, hypocritical, opportunistic, and even genocidal in the fullest sense of the word.” They carried out deliberate use of massacres. Large scale massacres by Pakistani Forces, and a deliberate scorched earth policy, contributed to the massive death toll. Thusly, the use of the word genocide is wholly accurate and appropriate to their regime. Their policy has been summed up by a phrase attributed to Pakistan’s army and their local cohorts “To Hell or to Connaught or Amiodarone or Cordarone” and that has been described by historians as genocide. The Almighty sent the potato blight... but they created the havoc all around this part of land. What they did all constituted one of the modern horrible genocides in modern history, where a whole population was attempted to annihilate to satisfy the desires of a group of power-hungry people belonged to Pakistan. They took possession with all sophisticated weapons of destructions in accordance with their customs and they caught all the people. Not one escaped...

In view of these crimes of Pakistan against humanity and civilisation, we hold them responsible for these crimes, as well as those of their agents who were culpably involved in such massacres. They sent their brutal soldiers along with their local accomplices to the former Eastern part of Pakistan only their ‘Death’s Head Units’ with the orders to kill without pity or mercy all men, women, and children of the Bengali race or language. Only in such a way, they boastfully said they would win the vital space that they needed. Once the Pakistan’s army cracked down on us, they implemented a highly organised strategy of persecution, murder, and genocide aimed at ethnically purifying former eastern part of Pakistan, a plan like Hitler called the “Final Solution”. This was a crime so monstrous, so undreamt of in history … that the term genocide has had to be coined to define it. Allyson Schwartz has by right appealed to the world indwellers, “The 20th century taught us how far unbridled evil can and will go when the world fails to confront it. It is time that we heed the lessons of the 20th century and stand up to these murderers. It is time that we end genocide in the 21st century.”

The Bangladesh’s genocide is the most brutal, for especially because it did not only kill 3 million people directly. But it killed a whole culture and history - the history of an ancient civilisation and the cradle of civilisation. All that land was destroyed, stolen and denied. That is the most brutal. It seems unthinkable that humans are capable of atrocities as fierce and as devastating as genocide, yet they committed with near nonchalance. This includes not only the mass killing of the Bengali people but the attempt to eradicate it as a living culture. Every genocide, regardless of its scale, is a tragedy of epic proportions – the loss of a people, a culture, and a language is an extinction that hits far too close to home. I personally watched these massacres happened in 1971; they used our holy religion-Islam and pronouncing the holy words “Naray-e-Takbir, Allah-hu Akbar. Pakistan Zindaba and Pakistan is the holy place of Islam” and slaughtered our freedom-loving people pitilessly. They did never permit for burial of those dead bodies. Instead, they then vauntingly allowed those lamentable dead bodies to eat by the vultures, jackals, dogs and other human flesh eaters and thus celebrated such brutal darts with all unkindness.

Synonymous with the word “genocide”, Yahya Khan junta and his coterie were responsible for one of the most systematic and nauseatingly efficient genocides in history in 1971. Combining all of his concentration camps disgorges, and mass executions together led to a death toll in the three of millions. Today, however, we can see how wrong the Pakistani military junta and some political leaders were and just how merciless their reign of terror was. Bangladesh Genocide is known as the one of the most gruesome genocides in the history. The crimes committed by Pakistani troops during the Bangladesh Liberation War of 1971 were unfortunately remaining somewhat unknown in the greater world even today.

The genocide is also widely known for heinous crimes against women with estimates of 400,000 women being raped by Pakistani troops as well as their local collaborators. The genocide committed by Pakistani Army which was assisted by various groups like Jamaat-e-Islami, Shanti committees, Al-Badr and Al-Shams, Razakars which were generally dominated by the Bangla-speaking Pakistani people and the Bihari Muslims. The killings also included deliberate destruction of Bengali culture through the mass killing of intellectuals and other nationalists who regarded Bengali culture as their own.

The move by Pakistan army also sought to get rid of Hindu Minorities in Bangladesh who used to be one of the biggest communities in Bangladesh. Because of that ground, whenever we came across them, they with their red eyes on the first instance enounced the words, “Tum Hindu Hai” (you are a Hindu). Like so many people, I had to show my genital organ on many junctures to prove my Muslim identity at gun points by the Pakistan’s military and their local heinous collaborators - the Bangla-speaking Pakistanis and the Bihari Muslims. Even I narrowly escaped murder attempts five times at their hands during that time. The killings were estimated 3 million which is a huge number considering the fact that the killings took place during the 9 months of Bangladesh Liberation War in 1971. The genocide led to the fleeing of 10 million refugees towards India which caused huge economic hardships for her and forced Indira Gandhi to seek international support for recognition of Bangladesh and the training of Mukti Bahini (Freedom Fighters). Finally, Bangladesh came into being on 16 December 1971 as an independent and sovereign country. But Pakistan never has regretted the mass-scale genocide they committed in Bangladesh in 1971.There is nothing sane, merciful, heroic, devout, redemptive, wise, holy, loving, peaceful, joyous, righteous, gracious, remotely spiritual, or worthy of praise where mass murder is concerned. Albert Camus wrote, “No cause justifies the deaths of innocent people.”

March 25, the day before Bangladesh’s Independence Day, will now onwards be commemorated as the Genocide Day for the grave genocides committed by the Pakistani military junta and their local accomplices during the 1971 Liberation War. We have to remember always those horrible genocides. March 25 shall live as the Eternal Flame in our history. This was a tragic event in human history, but by paying tribute to the Bengali community, we ensure the lessons of the Bangladesh’s genocide are properly understood and acknowledged. Words without deeds violates the moral and legal obligation we have under the genocide convention but, more importantly, violates our sense of right and wrong and the standards we have as human beings about looking to care for one another. Jon Corzine has aptly said, “Never again is the rallying cry for all who believe that mankind must speak out against genocide.” With faith and courage, decades of Bangladesh’s people have overcome great suffering and proudly preserved their culture, traditions, and religion and have told the story of the genocide to an often indifferent world. The international community should come forward to recognise the Day as “Genocide Day.” It also will create awareness in combating and preventing the crime of genocide everywhere in the world. Say a prayer for them all who met with tragic murders on 25 March 1971 and throughout the months of 1971. Commemorating such a dark period in history means a solemn affair, with the day marked by remembrance services for those who lost their lives.

The writer is a senior citizen