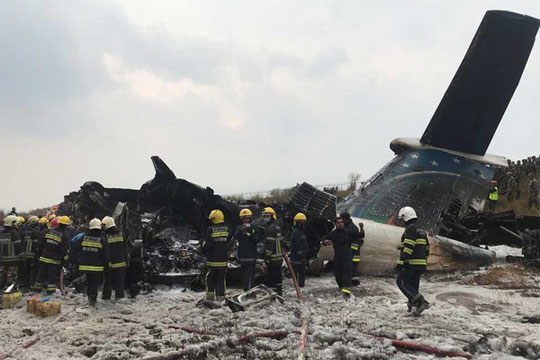 When the US-Bangla Flight BS 211 took off from Shah Amanat International Airport in Dhaka on last Monday for Nepal’s Tribhuvan International Airport with 67  passengers little did anyone know that this will be the last flight for the ill fated flight of the aircraft and 51 of its passengers out of 71 (four crew included). The passengers included newlywed honeymooners, couples on belated honeymoon, thirteen medical students returning home from Bangladesh after completing their final examinations to be with their family, few government officials going to attend a conference in Kathmandu and of course the regular tourists from Bangladesh.

Nepal, the land of Mount Everest (known as Sagar Mata) and enchanting natural and pristine beauty is a favoured destination for tourists from around the world and for Bangladeshis it is more favoured because of its nearness to Dhaka and one can spend a week in Nepal on  a shoestring budget. The flight time to Tribhuvan is about one hour fifteen minutes to one and half an hour. The people are friendly and hardworking and for citizens of Bangladesh the visa on arrival are free and a decent stay can be arranged in hotels catering to the visitors with minimum of cost. A   landlocked country with a population of about 28 million Nepal’s economy is highly dependent on tourism and foreign exchange remittance by its expatriate workers as it does not have any significant industry. Its tourism industry was hard hit when the country was devastated by a strong earthquake in 2015 that caused massive destruction to its people and property.

The flight BS 211 took off from Dhaka around 12.51 p.m. on Monday and in the cockpit was a very experience pilot Abid Sultan and Prithula Rashid, a teenaged woman co-pilot. Prithulas are the new generation youngsters whose feat and profession have taken Bangladesh to a new height and their courage and profession are slaps to the half educated mullahs who want to send our daughters back to the kitchen. Pilot Abid Sultan is experienced as he came from Bangladesh Air Force where he flew Mig-21, a highly sophisticated fighter jet. Flight BS 211 unfortunately did not make it safely to TIA on that day and crashed near the runway in a soccer field instantly killing 47 (some reports say 49). The final death toll rose to 51 as few more died in the hospital including the pilot. As the news broke out in the Bangladeshi media the entire nations was stunned and shocked and taken by grief and the Prime Minister Sk. Hasina who was on an official tour of Singapore cut short her visit and returned to Dhaka on Tuesday. What is amazing is immediately after the crash social network postings had some bizarre comments from people some of whom never ever flew on an aircraft. Suddenly there emerged dozens of self-styled aviation experts notwithstanding the fact that amongst all modes of modern travel air travel is considered as the safest of all. In Bangladesh everyday on an average fifteen people lose their lives due to road accidents and from the aviation related reports out of two hundred thousand flights only two accidents are reported. No airlines can claim it never had an accident. In some accidents there are no survivors and in few miraculously either everyone is saved or some just manages to survive by sheer stroke of luck as in the case of BS211. US-Bangla is a new generation private airline of Bangladesh and has done well in recent years. It had tried to maintain its schedule; its ground staff and in flight crews are friendly and perhaps many are not aware that when Bangladesh Biman resumed its domestic flights most of its crew including the pilots were borrowed from US-Bangla as Biman did not have short flight cabin or cockpit  crews. Biman stopped its short hauls domestic flights about a decade back.

Since 1972 I have flown thousands of miles in domestic and international flights and from my experience I can say that Bangladesh can boast of having some very experienced cabin crew and pilots compared to many airlines in the region. The flight time from Dhaka to any of the domestic airports usually does not exceed forty minutes and since independence the country had only one tragic accident on August 5, 1984 when a domestic flight from Chittagong to Dhaka crashed near Dhaka airport (ZIA in those dates). The cause of the crash was sudden and abrupt deterioration of the weather, hitting the aircraft with strong gusty wind and heavy rain. It was an F-27 aircraft (now taken off from the sky) and all forty nine people, including the crew were killed in that flight. Another flight skidded off the runaway in Sylhet some years back but by sheer experience of the pilot no harm was caused to passengers. Skidding of aircrafts from runway is not new and it can happen in any country. Perhaps most accidents happen in US where the air traffic is heavy and everyone is trying to cut cost due to be in business in a world where the airlines industry has become hyper competitive. US-Bangla uses Dash Q8-400 aircrafts on its domestic and short haul flights and recently it has procured four Boeing 735 aircrafts. The ill fated air craft is seventeen years old and some of the self styled experts blamed the age of the aircraft for the accident. Excepting few airlines like Singapore Airlines, Emirates, Etihad, Qatar and Saudia, most of the airlines use old aircrafts to expand their fleet. Some of these aircrafts are leased and some are purchased from other airlines as those airlines usually are phasing out their existing line of aircrafts and adding a new model. In Bangladesh an airlines even purchased cargo planes from Brazil which usually carried meat from rural areas and added to its fleet. The airlines could not stay in business for long just because of mismanagement and the clients lost their faith and trust in this airline. In the service sector providing satisfactory service does matter. Usually a new aircraft has an operating life of about twenty years depending on its model, maintenance and usage. An old aircraft can be given a new look and lease of life once the engine is changed and it maintenance is good. Airlines business needs professional and innovative management, regular maintenance and must build customer satisfaction and trust. Many big names in the industry has gone out of business in last one decade notable amongst them are Swissair, Japan Airlines, TWA, United Airlines, Al-Italia, Delta, Sabena etc. Some of these airlines still fly because the governments of their respective countries have given them bailout packages. PanAm once a big name in airlines industry has now become part of history.  British Airways is limping and PIA may close its business any time. Malaysian Airlines (MAS) is Bankrupt. The government has kept it in business.  Air India and Indian Airlines have merged to become Air India.

Sometimes people in this country seem very unkind in hours of national crisis. The Kathmandu crash is a national crisis of small kind.  The crash of flight BS211 flight in Kathmandu has brought out the evil of some of such people. Initially the Captain of the flight BS211 Abid Sultan survived the crash. The evils started cursing him why did he have to survive when he ‘killed’ so many passengers not realising the fact no captain of any aircraft tries to survive killing his passengers on board. To satisfy this bunch of morons Captain Abid succumbed to his injuries the same night. Some religious bigots tried to justify the crash because a woman, Prithula Rashid was in the cockpit. An idiotic statement indeed! According to reports, Prithula single handedly helped at least ten passengers to get out of the plane before she succumbed. She made all of us proud and the Nepalese media named her as ‘Daughter of Bangladesh’. The religious bigots will take nothing of it. Some think that the crash is a ‘major blow to brand Bangladesh.’ If that was true the number of people taking flights either in Bangladesh or elsewhere would have dropped drastically. Contrary to that it keeps on increasing. As mentioned flying is the safest mode of transport. Nepal is a small country with limited resources. It has done its best under the circumstances. Its government, the civil aviation authorities must be thanked for what it has done.

There are many theories making its round as to why the flight BS211 crashed.  Usually aircrafts crash, either midair or on the ground for a number of reasons like a. technical problem, b. human error, (c) act of God, d. weather condition,  e. mid air collusion with another aircraft,  etc. The only way to find out the exact cause of the accident is to decode the black box and it may take time. There is an allegation that the pilot may have suffered from fatigue and he was forced to take the flight. This allegation needs to be investigated. The most widely circulated reason sighted is the miscommunication between the pilot and the air traffic controller. How far this is the cause can only known after decoding of the black box.  Speculations will make its round. In the meantime let us pray for those departed on that ill fated afternoon of Monday and pray for the early recovery of those injured. Let airlines in the private sector survive. They are part of our success story.