Who Is Real Enemy of Islam? 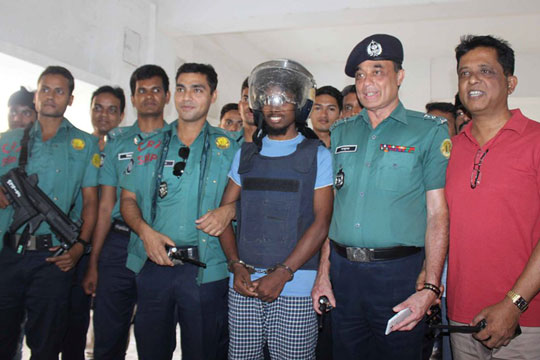 I attacked Zafar Iqbal because he is an enemy of Islam,” the assailant who stabbed Muhammed Zafar Iqbal told investigators. He is not alone.

A large number of Bangladeshi Muslims can be found holding the same belief. Not only Zafar Iqbal, other eminent intellectuals including Professor Anisuzzaman, Prof Muntasir Mamun, Hasan Azizul Haque and many other outspoken writers are also in the bad books of those who subscribe to a radical ideology; as a result, the secular free thinkers, who can be termed as the best minds of the country, are dogged by death threats.

So, why they think Zafar Iqbal is an enemy of Islam? Do they have any proof? Chances are that they never read a book or column of Zafar Iqbal, they just heard that he is a Nastik (atheist). As they heard it, they believed it blindly; as they believed it, some among them could be persuaded to go after him. Even, much like a herd of wild boars some celebrated the attack and ridiculed the attacker for “stabbing with a blunt knife”.

Lack of understanding is a serious problem for many among us, the ordinary Muslims. It begins in the early age when we learn to recite the Holy Qur’an without understanding a single word written on it. We recite the Holy book repeatedly; recite from it five times a day while offering prayers, but most of us hardly have any idea about what we are reading in the Holy Qur’an or saying during prayers. We take it for granted perhaps because it is said that recitation of the Holy Qur’an even without understanding has religious significance. There is no question about that. But reward is certainly more for those who understand Allah’s words and act upon it. That apart, how do we accept it in our mind that we are incapable of understanding what we read daily?

Central to leading a human life is reasoning. When we perform such a vital task of reciting the Qur’an without proper understanding, we degrade our inner selves because our propensity to do many other things without clear perception increases. As we neglect understanding and reasoning our world becomes obscure with so many confusions. Moreover, a section of half-educated Mullahs exacerbates our miseries. The way they explain things make us susceptible to misunderstand nearly every one and every thing in this world. They spew hatred, which at times spreads like wildfire, thanks to Facebook and other social media sites.

In recent years a series of attack on minority villages took place based on fabricated Facebook posts, including the November 10 attack on Hindus in Thakurpara village in Rangpur, October 2016 attack on Hindus in Nasirnagar, and 2012 attack on Ramu’s Buddhist community. Lest we forget, millions of people across the country were fooled in 2013 to see a convicted killer’s face on the moon through the circulation of a photo-shopped picture.

In all these cases good Muslims were deceived and misled by some vested interest groups to make them commit heinous crimes in the name of Islam. This is the price of lack of understanding and reasoning.

Militancy is one of the worst contemporary scourges, and often it is very wrongly linked with the sacred name of Islam. Commonly, the inspiration for militancy and terrorism flows from perverse religious teachings. In carrying out their violent missions the terrorists invoke the name of Islam. Thus the militants are not only guilty of undermining peace but also desecrating the sacred image of Islam which is indisputably known to be a religion that asks the believers to strive for upholding peace, liberalism and humanism.

Targeted attacks on secular and liberal minded people are almost like the sequence of the targeted killing of our intellectuals during the War of Liberation. So, it can be assumed that anti-liberation forces are making a common cause with religious terrorists against the democratic and secular values of the liberation. Secularism and democracy are their common enemies, both benefit from distortion of religion and they have many other converging interests. For building a healthy nation discarding of the rotten apples is an inescapable necessity.

The government has urged all imams and religious leaders to come forward to speak against militancy during jumma prayers. Unfortunately, most among the ulema, including the imams of mosques are indifferent at best.  It is alleged that the imams are not commonly taking a position against militancy; some are even covertly endorsing militancy.

One can only hope that religious leaders and preachers will understand the gravity of the situation. Those who are killing people in the name of Islam are a threat to Islamic values and even the civilisation itself. So, religious teachers and preachers must not look the other way. It is their responsibility to propagate the true values of Islam to help isolate the few who are wittingly or unwittingly distorting Islamic values. A wrong teaching can only be corrected by replacing it by spiritual enlightenment.

Just as the imams and clerics should do more, cooperation of the entire people will be necessary. All groups which are disposed towards peace, tolerance and harmony must build up a strong defence against these evils. We must build a social resistance against the menace through disseminating the messages of Islam. Again, this is where religious leaders have a key role to play.

The government too should not confine its responsibility to application of force, but take some concrete and institutional measures. What has the government done to promote the true and liberal doctrines of Islam? The government can establish libraries or use existing libraries to disseminate the liberal doctrines of Islam, and can promote the Bengali version of the Holy Qur’an and tolerant schools of thoughts of Islam, while keeping a watch on the fanatical education that is turning young men and women into killers and self-killers.