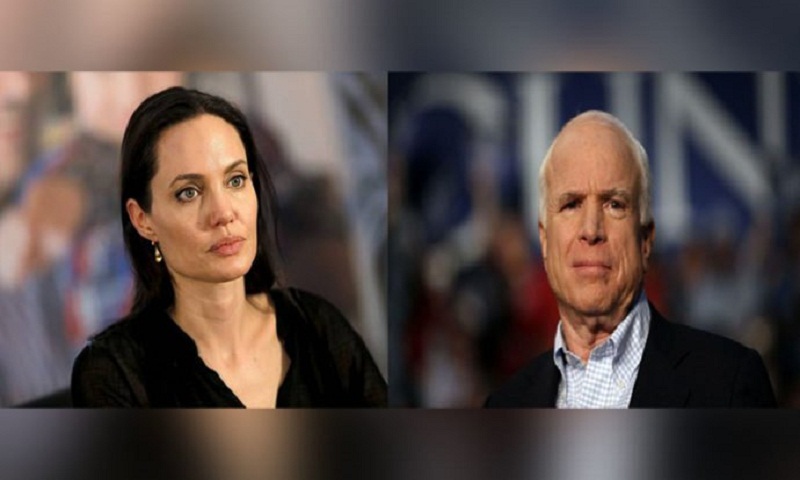 Actress and special envoy to UNHCR Angelina Jolie, and US Senator John McCain have called upon America for building effective diplomacy in Myanmar which has forced over 688,000 Rohingya people to flee heinous military operations that started since August 25 last year.

They expressed their concern over the Rohingya crisis in an opinion piece that was published by the New York Times (NYT) on Friday (March 8).

They opined that Myanmar’s military campaign “of killings, arson, rape and other mass atrocities” amount to ethnic cleansing.

They said America stood with our allies to support democracy in Myanmar for more than three decades and demand freedom for thousands of Burmese (Myanmarese) political prisoners. Now it is America’s turn to show equal resolve “to stop the violence and safeguard the rights and freedoms of all Burmese [Myanmarese] peoples.”

They suggested the United States should take the lead in four ways, and ask their allies to join in this regard.

First, the duo suggested that the US should “demand an end to impunity in Myanmar and hold the perpetrators of these most recent atrocities accountable.” They said the coordinated decision by the State Department and the European Union “to cease consideration of travel waivers for current and former senior leaders of the Burmese [Myanmarese] military is a good start, but it is not enough.”

The two suggested that passing the Burma Human Rights and Freedom Act – a bill sponsored by Senator McCain – would impose sanctions on Myanmar military and security forces responsible “for the bloodshed and send the strong message that those who commit atrocities will pay a price.”

Second, they said the US must support efforts to properly investigate human rights violations. Mentioning that Myanmar has denied all accusations in this regard, America should “champion and lead international efforts to ensure a credible, independent mechanism outside Myanmar to investigate and ultimately prosecute human rights violations and other crimes against the Rohingya, and encourage other countries to contribute to such efforts.”

Third, they recommended that America must support increased medical assistance for the Rohingya.

Finally, they said the United States must lead “efforts to resolve decades of ethnic strife throughout Myanmar,” including by conveying the recommendations of Kofi Annan’s Advisory Commission on Rakhine state and “extending citizenship to the Rohingya people.”