Aamir Khan makes Boney cry; tells how Sridevi might have drowned in the Bathtub 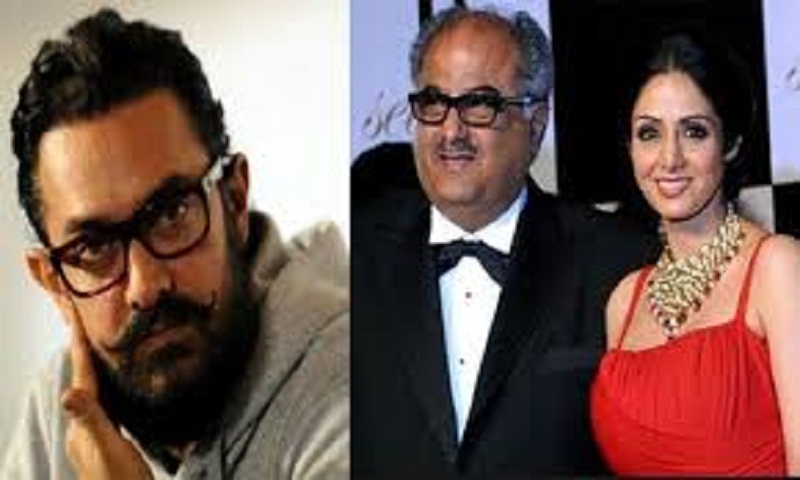 Boney Kapoor was very attached to his 'jaan' Sridevi Kapoor. The actress was found dead on February 24, 2018 inside the bathtub of her hotel room in Dubai, reports Filmibeat.

It was Boney Kapoor, who found Sridevi motionless inside the bathtub. Later, an official statement was issued which said that Sridevi died due to 'accidental drowning.' Recently, Aamir Khan met Boney and revealed an incident where a similar thing happened with his friend's wife.

Trade analyst Komal Nahata wrote in his blog, ''Boney Kapoor has still to get over his grief over the demise of his better half, actress Sridevi. It is not rare for the producer to shed tears while recalling the events in Dubai on 24th February, the day he reached Jumeirah Emirates Tower Hotel where Sridevi was putting up, after a couple of hours of which he found her dead body in the bathtub of their bathroom.''

Boney Was Inconsolable When Aamir Khan Called Him

''But Boney was inconsolable when Aamir Khan called him up from Los Angeles on 3rd March to pay his condolences. Aamir was out of station and, therefore, could not personally visit Boney when the latter reached India with Sridevi's mortal remains. Aamir did call Boney a couple of times but, quite understandably, Boney missed his calls.''

''Realising that Boney would be both, distraught and busy with the last rites once he landed in India, Aamir decided to telephone him after a couple of days. He was returning from Los Angeles on 3rd March and called up Boney on his way to the LA airport to inform him that after landing from LA on 4th, he would visit Boney straight from the Shivaji International Airport.''

When Boney Told Aamir What Happened With Sridevi

''Over the telephone, Boney and Aamir got talking about the unfortunate demise when the former started to recount the chain of events in brief, leading to the horrifying end. Hearing this, Aamir instantly recalled how a very dear friend of his had, a couple of years ago, almost lost his wife in the bathtub.''

''It had so happened that Aamir's close friend was on a holiday abroad, with his wife. While there, the wife had one day gone to the bathroom for a bath in the tub. Not having much to do, the husband, after a while, entered the bathroom, wanting to chat with the wife while she bathed in the tub.''

''To his shock, he saw about half his wife's face, including the nose, submerged in the water. Calling her out by her name, the man saw her stare at him blankly and make some feeble sounds. Wondering what was happening, the man shouted out to his wife, ran towards her and still screaming her name, pulled her out of the bathtub.''

When He Pulled His Wife Out..

She Was Suffering From Low Blood Pressure

''She looked half-conscious and could barely stand. The visibly shaken husband sat his wife down for a few minutes till she felt better. "What had happened," said Aamir to Boney, "was that my friend's wife suffered from low blood pressure, and when she lay in the bathtub in extremely hot water, with her entire body, except her head, in the water, the blood pressure went further down.''

She Could Have Drowned In The Tub Just Like Sridevi

''This made the blood rush down from her head (which was not in the hot water) to the lower parts of her body, making her feel giddy and semi-conscious. The doctor told the couple that because of the low blood pressure and the consequent flow of blood from her head to the other parts of the body which were inside the hot water, she could have lost complete consciousness and drowned in the tub.''

''Had the husband not entered the bathroom, he would have, in all probability, lost his wife that day as she would have drowned in the water." Aamir added, "The wife would not even have got a chance to shout for help or scramble to come out of the bathtub as she would not have realised that she had drowned, because of her unconscious state."

''Aamir pacified Boney and promised to see him on landing in India. In less than 24 hours thereafter, Aamir was by Boney's side in his house. The actor called on Boney on 4th before going home from the Shivaji International Airport in Bombay.''