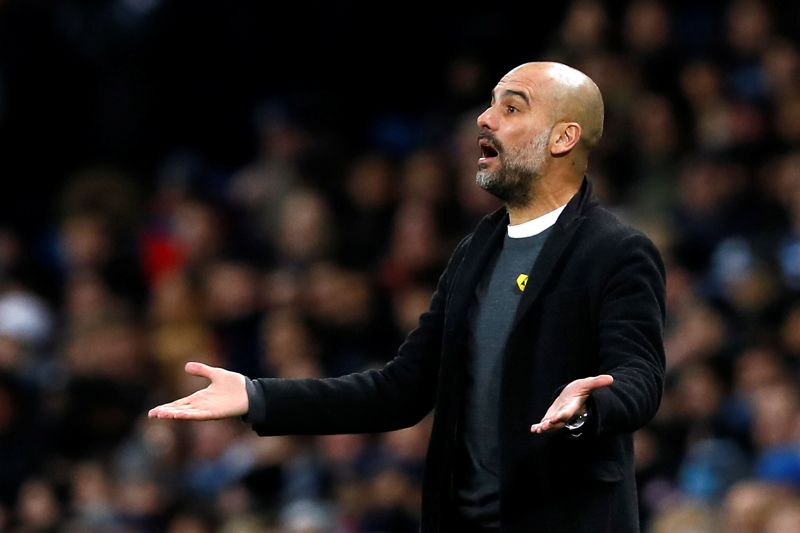 Manchester City manager Pep Guardiola criticised his heavily rotated side for "forgetting to attack" despite reaching the Champions League quarter-finals 5-2 on aggregate over Basel on Wednesday.

City suffered a first home defeat in 15 months as the Swiss champions came from behind to win 2-1 at the Etihad Stadium and salvage some pride from their last-16 tie after being thrashed 4-0 on home turf in the first leg three weeks ago.

"From tomorrow we will be happy to be in the quarter-finals for the second time in this club's history. We are new in that position, so we are so happy for that," said Guardiola.

"Just to pass to pass for itself is nothing, so the second half was really, really poor."

Guardiola could afford the luxury of making six changes from Sunday's dominant 1-0 win over Chelsea, but still saw his side extend their aggregate advantage early on when Gabriel Jesus tapped home after just eight minutes.

However, Mohamed Elyounoussi exposed some slack City defending to smash in an equaliser for the visitors nine minutes later before Michael Lang rocketed home a spectacular winner 19 minutes from time.

"It's special for us to beat this team and we go out of the Champions League with a decent performance in a very difficult situation," said Basel coach Raphael Wicky.

City could have the Premier League mathematically wrapped up by the time they are next in Champions League action in early April.

And on this evidence they will need the likes of Sergio Aguero, Kevin De Bruyne and David Silva to be well-rested and in-form if they are to deliver the dream of their Abu Dhabi owners by winning the European Cup for a first time as a number of youngsters and fringe players failed to impress.

"I understand after we see the second half the people that say the team is not ready to fight for everything," added Guardiola.

However, the Catalan coach hopes a three-week break following Monday's trip to Stoke will leave his side refreshed for the last eight.

"We have one more game on Monday and then we have three weeks off. In 180 minutes it is 5-2, so we are so happy to be in the next stage."

Leroy Sane was one of few regular starters retained in Guardiola's starting XI and continued his supreme form by creating the opener.

Jesus hadn't started since suffering knee ligament damage on New Year's Eve, but had the simplest of tasks to get back among the goals when Bernardo Silva latched onto Sane's pass to produce a inch-perfect low cross for the Brazilian.

City should have gone even further in front as Silva's shot from a dangerous Sane cut-back was blocked before Basel goalkeeper Tomas Vaclik made a fine block to deny Ilkay Gundogan his third goal of the tie.

However, a minute later Basel were level as Blas Riveros burst down the left and his deflected cross was dispatched powerfully past Claudio Bravo by Elyounoussi.

Guardiola grew visibly frustrated on the touchline as his side also started the second period slowly.

And they were punished when Elyounoussi's low cross was blasted past Bravo at his near post from a narrow angle by Lang.