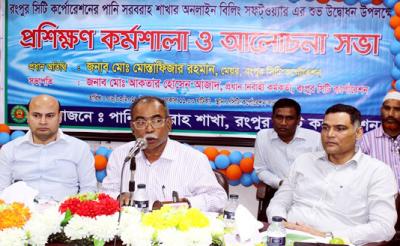 Mayor of Rangpur Mostafizar Rahman Mostafa introduced the online billing software for automation of the billing system for supplied water at a workshop followed by discussion arranged on the occasion at the conference room of RpCC on Tuesday as the chief guest.

Presided over by Chief Executive Officer of RpCC Akhter Hossain Azad, the City Councilors, officials and employees of the water supply and engineering sections of the city corporation attended the events.

Programmer of RpCC AKM Ahsan Farid discussed about technical aspects of the newly launched online billing software that will help the citizens in getting the bills for supplied water and making the payments easily in a hassle-free manner, reports BSS.

"Supply of pure and hygienic drinking water along other civic amenities like modern drainage and sewerage systems will be ensured for every citizen in the city in near future," he said

He sought cooperation of all concerned for smoothly conducting the infrastructural developments to build a well-planned, modern, traffic- jam free and eco- friendly beautiful city ensuring all civic amenities.