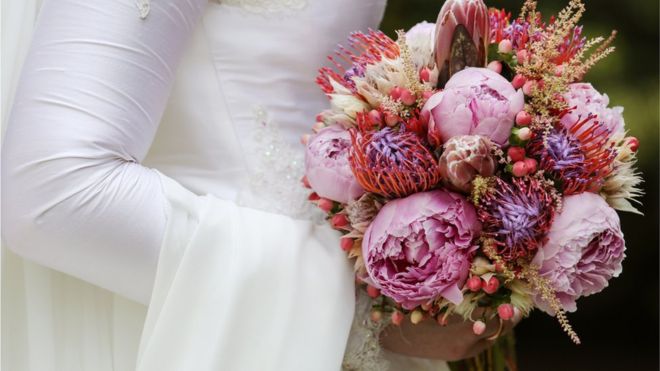 The judge found Ms Liao attacked the business owner's integrity "with all her might" and was motivated by malice.

Ms Liao was disappointed with the quality of her pre-wedding pictures.

She also said she felt that she had not been fairly treated.

British Columbia Supreme Court Justice Gordon Weatherill said in his 22 February ruling that she "failed to prove that her displeasure was justified".

He said there was "no coincidence" business for Amara Wedding began to suffer financially after Ms Liao launched her online campaign. The owners closed the business in January 2017.

In a series of posts on English and Chinese-language social media platforms, Ms Liao accused Amara Wedding and its owner, Kitty Chan, of a "bait and switch scam", "dirty tactics", and "lying to consumers", according to court documents.

The trouble began when Ms Liao was unhappy with pre-wedding photographs taken by a professional freelance photographer working with Amara Wedding.

Ms Liao and her now husband stopped payment on a balance owed to the company as a result, court documents say.

But Amara Wedding still provided the makeup, hair, photography, flower and master of ceremony services as promised in the contract with the couple.

After the event, Ms Chan told the pair that if they did not pay the balance owed, the photos would not be processed. They refused to pay, court records showed.

Ms Chan offered to refund them some of what they had already paid and to cancel their contract. They refused and took Ms Chan and her company to small claims court in August 2015, alleging breach of contract, according to court documents.

The couple's small claims action was dismissed in its entirety in October 2016 and Ms Chan won her counterclaim.

But Ms Chan told CBC News this week the damage to the business had already been done.

"What I have lost has already gone, so I don't think anything can compensate that," she said.

"I want to prove to people that they have to face any consequences when they say something on the internet."