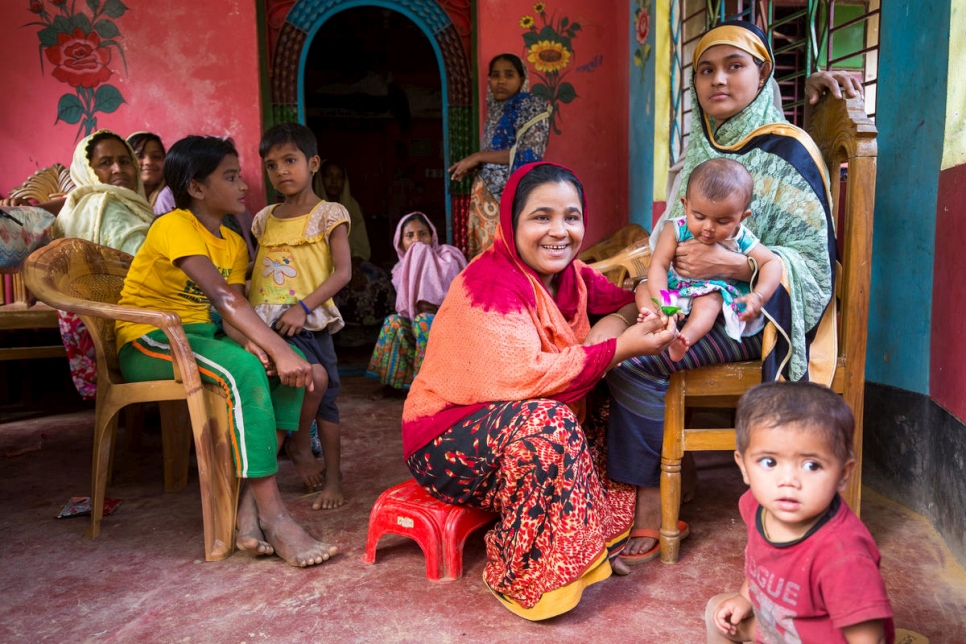 A few years ago, rising sea levels and land erosion forced Bangladeshi farmer Mohammed Karim to abandon his family’s smallholding on Saint Martin’s Island and start over on the mainland.

As thousands of Rohingya refugees streamed into the Kutupalong area from Myanmar last September, he did not hesitate when a group of exhausted families asked if they could use some of his land for temporary shelter.

“Seeing their sufferings, I couldn’t bear it any more, which is why I agreed to let them stay on my land,” says the father of three. “Many of them brought rice on their own, I provided them firewood and vegetables and fish.”

At first Karim allowed 40 of the families to stay in his home, surrounded by rice paddies, mangrove trees and vegetable plots. After nine days, the newcomers were able to build their own makeshift shelters with materials provided by UNHCR, the UN Refugee Agency.

Among those Karim sheltered was 26-year-old Abul Manzur, who fled attacks by Myanmar troops and militia. He trekked for weeks in search of safety before finally settling on Karim’s land.

“We have never been disturbed by anyone since we got here,” says Manzur with evident relief. “We feel safe and secure.”

More than 688,000 women, children and men have fled Myanmar since violence erupted there in late August and Bangladeshis have been at the forefront of a huge relief effort, donating food, clothing, shelter materials, and, in this corner of south-east Bangladesh, the use of their land.

A short distance away from Karim’s home in the patchwork of villages around Kutupalong lives mother-of-four Khaleda Begum. She is among many local people who responded to the needs of footsore refugees in need of shelter by opening up their homes.

“They came with absolutely nothing and I was truly shocked at seeing their condition,” recalls 26-year-old Khaleda, who shared her family’s food, kitchen and beds with 36 refugee families. “I felt their pain … I could not bear the sorrows that they were going through.”

On their land, Khaleda’s family cut down more than 250 fruit-bearing mango, jackfruit and guava trees to accommodate the newcomers, among them several heavily pregnant women, four of whom gave birth in the first few days.

Among the new parents were Safita Begum, 18, and her husband, Mohammed Kausar, 22, who sought shelter at Khaleda’s home on 2 September after barely escaping Myanmar with their lives. Their daughter Rumi was born five days later.

“I am just happy and grateful to Allah that I have escaped a tragic end to my life,” says Safita, who says she wants a safe and secure future for her daughter.

Bangladesh is one of the world’s poorest and most densely populated countries. The refugee influx in the past six months has transformed the area of low hills peppered with villages and hamlets around Kutupalong into the largest refugee settlement in the world.

The relief efforts of residents like Karim and Khaleda are supported by the Bangladeshi government, in tandem with UNHCR and its local and international partners.

Nearly six months into the displacement crisis, Khaleda’s family smallholding also hosts other facilities including a child friendly space provided by Save the Children International and a clinic operated by the Bangladesh-based development agency BRAC. Both are well used.

“Every day over 100 people come here to use the health services”, said Mohammed Naimur Rahman, medical assistant from BRAC. “Though we provide very basic services, it is still very useful for the refugees as it is very convenient to them.”

On Karim’s land, UNHCR and its implementing partner Caritas have helped build shelters, tube wells, latrines and bathing spaces to improve conditions for the refugees and reduce the risk of waterborne diseases.

With the influx, refugees outnumber Bangladeshis in the settlement area. Their presence has contributed to rising prices of staple foods, fuel and building materials and has caused concern about pressure on the environment, leading to some protests. Neither Karim or Khaleda doubt that they have done the right thing.

“Every day many Rohingya refugee women and children come to our house now, and we enjoy their company,” says Karim. “My children play with their children. They have new friends.

“Until they feel safe to go back to Myanmar I will host them in my land.”

Khaleda says that before they arrived, her neighbourhood was isolated and quiet. She feels safer with new neighbours living around her and enjoys hearing the laughter of their children.

“I feel happy that I could help them when they needed it the most.”