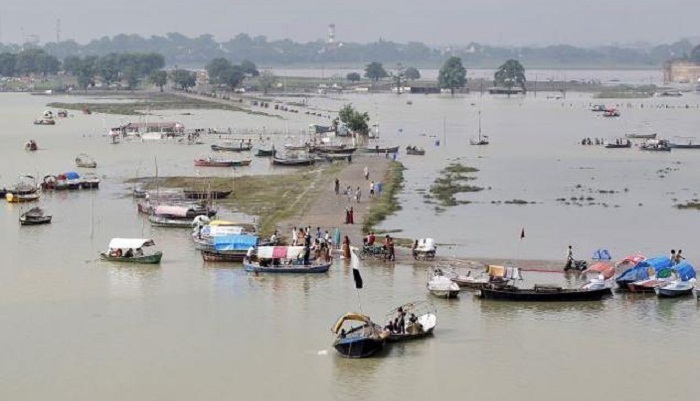 Bangladesh Water Development Board (BWDB) on Thursday revealed the outline of a mega project to reclaim 1600 square kilometres land mainly by narrowing down the width of the Jamuna and Padma rivers in 25 years.

The BWDB prepared the outline, with Center for Environmental and Geographic Information Services (CEGIS) being its key partner, suggesting the reclamation project which it called 'Comprehensive Plan for Stabilization of the Jamuna-Padma River and Pilot Intervention for Land Reclamation' in the northwestern region.

"The (proposed) project is outlined with an aim to reduce the width of the Jamuna and the Padma to 7 kilometres on an average which is now 16, eventually to reclaim 1600 square kilometres land," a BWDB official familiar with the project told BSS.

He said the project was designed to perform the task on "leering and doing" principle, also to conserve 350 square kilometers navigation route in the two major rivers to keep them functional round the year.

BWDB officials said the proposed project intended to be the extension of their ongoing Flood and Riverbank Erosion Risk Mitigation Investment Programme or FRERMIP project, which by now reclaimed 16 square kilometre lands from the Jamuna in Sirajganj. Another such reclamation process was underway at Harirampur area of Manikganj.

Officials said the project was outlined keeping in mind particularly the necessity of huge size of investment-friendly land to materialise the government's Vision 2021 and 2041.

Officials of CEGIS, a consultative agency with government having a major stake, said the project proposed to protect the 220-kilometre banks at different places of the Padma and Jamuna alongside reclaiming lands, develop flood control mechanisms and protect river routes through capital dredging.

The proposed plan will be implemented in 25 years at a cost of Tk 40,000 crore in phases, the officials said.

During the briefing, the Prime Minister said protection of rivers being "Bangladesh's lifeline" was a must for "saving and developing" the country while the land reclamation would help increase investment and agriculture land and remove poverty.

"We've to give attention on how we can reap maximum benefits from the rivers . . . we've to also focus on how we can utilise the silt and reclaim more lands from rivers," she said.

Experts said huge onrush of sediments from the upstream Indian regions massively reduced the Brahmaputra or Jamuna and the Padma carrying capacities, heightening their riverbeds and exposing areas along their banks to severe erosion, displacing millions of people in the past few decades.

They said a proper river management approach through delicate engineering interventions could help reclaim the land grasped by the rivers and expedite the socioeconomic scenario of the region.