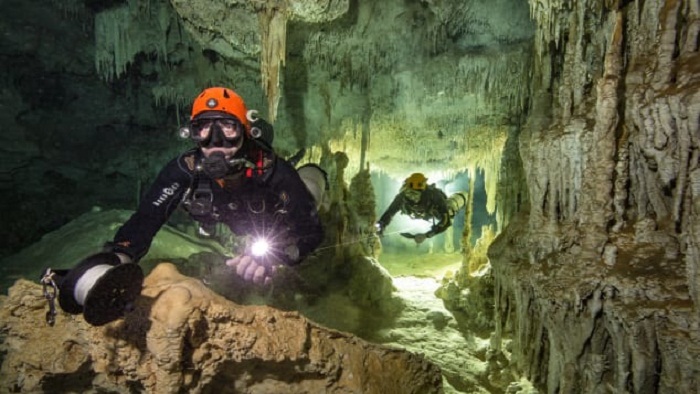 The Great Maya Aquifer Project (GAM) team -- committed to studying the mysterious waters of Mexico's Yucatan peninsula -- spent years exploring the caves of Sac Actun and Dos Ojos in Tulum before connecting the two caverns together.

The explorers' discovery marks the identification of an incredible archaeological site, illuminating the stories and rituals of the Mayan civilization.

The watery labyrinth connects the cave system known as Sac Actun with the Dos Ojos system. According to the rules of caving, when two caves connect, the largest absorbs the smallest. This means Sac Actun takes the title of largest cave.

Spanning 347 kilometers (216 miles), this is a stunning web of underwater grottoes -- and now the goal is to connect Sac Actun with three other local underwater cave systems.

"This immense cave represents the most important submerged archaeological site in the world, as it has more than a hundred archaeological contexts," says Guillermo de Anda, GAM director and researcher at the National Institute of Anthropology and History, in a statement.

"Along this system, we had documented evidence of the first settlers of America, as well as extinct fauna and, of course, the Mayan culture," adds de Anda.

The Maya regarded their caves as a place to communicate with their gods -- so it is likely significant discoveries will be uncovered in the bowels of San Actun.

The next phase of the San Actun project will involve analyzing the water quality of the new cave, investigating the biodiversity and continuing to map out the submerged maze of caverns under Tulum.

Robert Schmittner, the exploration director of the project, has been working on the project for more than 20 years.

He hopes one of the consequences will be the preservation of the caves for the future.

"Now everybody's job is to conserve it," he says.