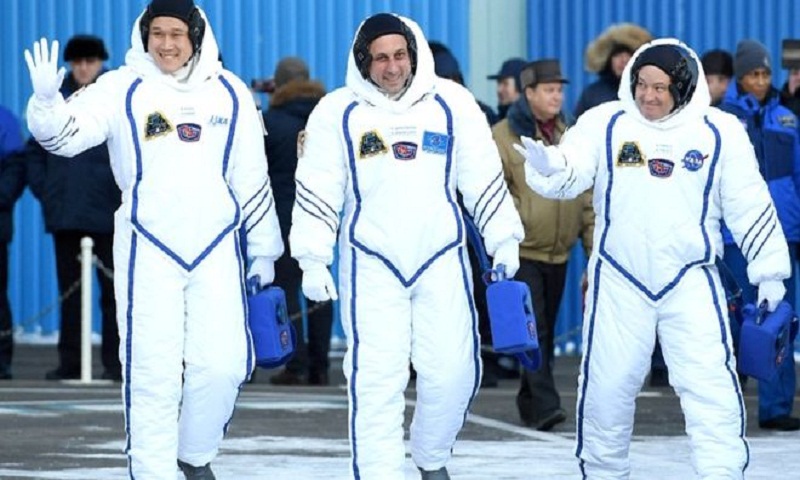 A Japanese astronaut who is living on the International Space Station says he has grown 9cm (3.5in) since arriving there just over three weeks ago.

Norishige Kanai wrote on social media he was worried he would not fit into the seat of the Russian Soyuz vehicle that is due to bring him home in June.

Astronauts grow an average of between two and five centimetres in space.

This is because of the absence of gravity which allows the vertebrae in their spines to spread apart.

Mr Kanai tweeted: "Good morning, everybody. I have a major announcement today. We had our bodies measured after reaching space, and wow, wow, wow, I had actually grown by as much as 9cm!

"I grew like some plant in just three weeks. Nothing like this since high school. I'm a bit worried whether I'll fit in the Soyuz seat when I go back."

The Soyuz spacecraft which takes the astronauts from and to Earth has a limit on seating height. If crew members become too tall, it could pose a problem.

Astronauts can grow while in space and return to a normal height when they go back to Earth.

"Nine centimetres is a lot, but it is possible, knowing that every human body is different," Libby Jackson of the UK Space Agency told BBC News.

"You do get taller in space as your spine drifts apart, usually by about two to five centimetres.

"There's a range of growth for different people, and everybody responds differently."

This is the first space mission for the Japanese astronaut who was previously a diving medical officer with the Japan Maritime Self-Defense Force, reports BBC.