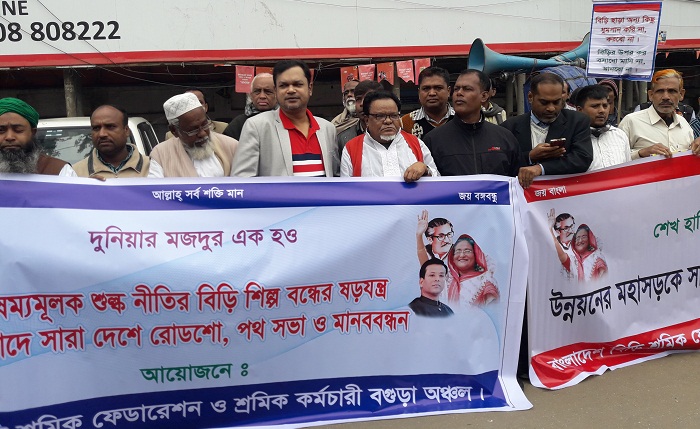 Workers of bidi industry have vowed to chase away multinational cigarette manufacturer British American Tobacco (BAT) from Bangladesh for its ‘involvement in conspiracy against the bidi sector’.

They made the pledge at a human-chain programme, organised by Bangladesh Bidi Workers Federation and bidi workers and employees in Bogra, at Satmatha More in Bogra on Tuesday.

Speaking at the programme, federation general secretary MK Bangali said the bidi industry has been put on the verge of ruin through a conspiracy, which has been going on for half a century.

He accused the finance minister of taking a move to destroy the bidi industry in the name of checking smoking.

Bangali alleged that BAT is siphoning off hundreds of crores of taka from Bangladesh but the departments concerned are not taking any action against the company.

The federation general secretary said bidi smokers are switching to cigarette as imposition of ‘excessive taxes’ has led to price hike of bidi, which is manufactured using local ingredients and technology.

Federation joint secretary Abdur Rahman alleged that the government is giving privilege to the multinational cigarette company. He warned that no conspiracy against the bidi industry will be successful as long as bidi workers are there in the country.

Abdur Rahman urged the government to reduce tax on bidi and said otherwise workers in the industry will begin a hunger strike in front of Bangladesh Secretariat.

Current tax regime requires bidi factories to pay the government Tk 252.8 in tax for per thousand bidi sticks, according to him.