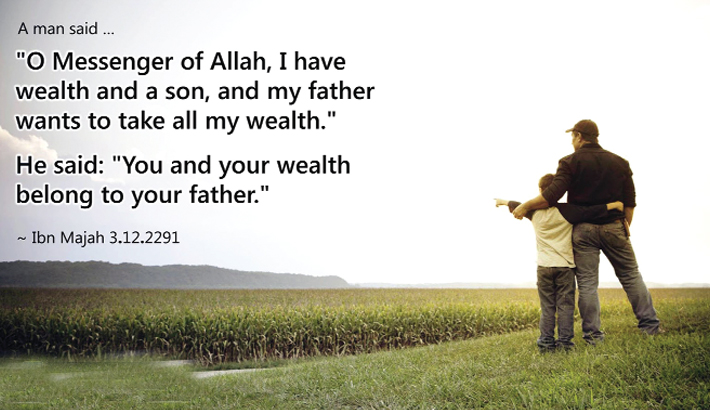 Benevolence of parents is Wajib (Mandatory) in Islam. Many verses of the holy Qur’an as well as the narrations of the Prophet (Pbuh) clearly say that benevolence towards them is Wajib. Allah (SWT) says in the Quran: “And We have enjoined on man goodness to his parents.” (Sura Abkabut: Ayat 8). In another verse Allah (SWT) says: “Be grateful to Me and both your parents...” (Sura Luqman: Ayat 14).

We know form prophetic narration that service to parents is better than Jihad. Mu’awiyah Ibn Jahimah As-Sulami (Ra) narrated that Jahimah came to the Prophet (Pbuh) and said, “‘O Messenger of Allah! I want to go out and fight (in Jihad) and I have come to ask your advice.’ He said, ‘Do you have a mother?’ He said, ‘Yes.’ He said, ‘Then stay with her, for Paradise is beneath her feet.’” (Sunan Nasayee). Goodness towards the parents is the expiation of various sins. It is related in a report that a man came to the Holy Prophet (Pbuh) and said, “‘O, Prophet of Allah (Pbuh) there is not a single misdeed that I have not committed. Is there repentance for me?’ The Holy Prophet (Pbuh) told him, ‘Go and do goodness to your father in order that your sins may be expiated.’ When the man left the assembly the Prophet (Pbuh) said, ‘If his mother had been alive, it would have been more meritorious to do good to her.’”

Taking care of parents and behaving good with them have some great virtues in Islam. On the other hand, disobedience to parents is one of the major sins that lead children to hell according to Qur’an and Hadith. Abdur-Rahman Bin Abu Bakra (Ra) said that his father said, “We were in the company of the Messenger of Allah (Pbuh) and he observed: ‘Should I not inform you about the most grievous of the grave sins?’ (The Holy Prophet) repeated it three times, and then said, ‘Associating anyone with Allah, disobedience to parents, false testimony or false utterance.’ The Prophet was reclining, then he sat up, and he repeated it so many times that we wished that he should become silent.” (Sahih Muslim).

One who doesn’t deal with parents good, he may loss his Iman during the time of death. It is narrated by Imam Ahmad that a man came to the Prophet (Pbuh) and said, “O Messenger of Allah, there is a young man named as Alqama here who is dying. He was told, ‘Say Laa ilaaha ill-Allah,’ but he could not say it. He said, ‘Did he not say it during his lifetime?’ He said, ‘Of course.’ Then the Prophet (Pbuh) sent for his mother who said that she was angry with him because he used to favour his wife over her. Then the Prophet (Pbuh) gathered firewood and told his mother that he would burn her son before her very eyes. She said, ‘O Messenger of Allah, he is my son and I cannot bear to see you burning him in front of me!’ The Prophet (Pbuh) said, ‘O mother of ‘Alqamah’, the punishment of Allah is more severe and long lasting. If you want Allah to forgive him, then forgive him (yourself). By the One in Whose hand is my soul, his prayer, fasting and zakaah will not benefit him so long as you are angry with him.’ So the woman forgave her son and after some time he died after uttering the shahaadatayn (twin declaration of faith).” Abu Huraira (Ra) related that the Prophet (pbuh) said, “There are four people who will not enter Paradise as Allah decreed: a drunkard, a usurer, he who appropriates the orphan’s property without a legal cause and he who shows disrespect to one’s parents.” (Al Hakim).

The Prophet (Pbuh) saw in the night of Miraj that some people are being punished for disobeying parents. It is narrated that the Messenger of Allah (Pbuh) said, “‘In the night of Isra’ (Night Journey) I saw groups of people in the Hell-Fire hanged on trunks of fire.’ I asked, ‘Who are they, Gabriel?’ He said, ‘They are those who revile their parents in this world.’“

The writer is a national award winner Qari and Khatib of Baitush Shafiq Mosque (near Naitonal University), Gazipur