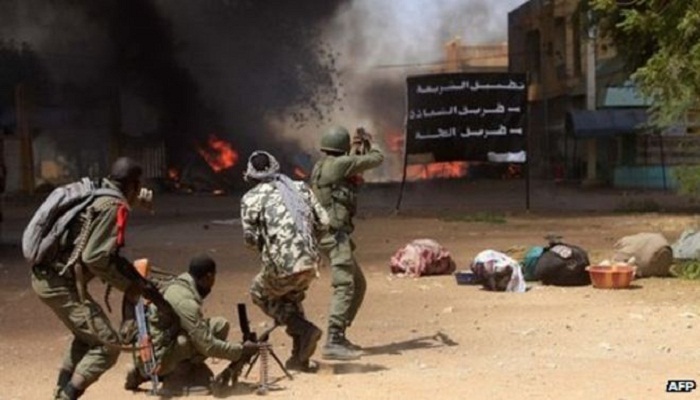 Ten militants and nine soldiers died in clashes between the Malian army and the main Tuareg rebel alliance, the government said Thursday, raising fears for the country’s fragile peace process.
The Tuareg-led Coordination for the Movements of Azawad (CMA) provoked the deadliest battle in almost a year between security forces and the rebellion as its fighters ambushed the central town of Lere on Wednesday.
“The provisional toll of the clashes is: armed forces—nine dead, six injured, six hostages, one damaged vehicle,” the ministry said in a statement.
“Enemy side: 10 dead and 16 injured, two vehicles destroyed; one vehicle, arms and ammunition recovered.”
Defence Minister Tieman Hubert Coulibaly said Lere was under control and “encourages the armed forces to fulfil their duty with determination to the service of our country”, the statement added.
A foreign security source confirmed the fighting had stopped late on Wednesday, adding there was “no winner, no loser”, with the rebels controlling the south of the town and the army dug in elsewhere.
The rebels justified the ambush by citing a “flagrant violation of the ceasefire” in the Menaka region of Mali near the Niger border, where pro-Bamako troops seized positions on Monday.
“This act of legitimate self-defence is not meant to claim new territorial positions, which is why our forces immediately left Lere after the fighting,” a CMA spokesman said, claiming there were “a dozen prisoners and several dead” in the enemy ranks.
The CMA had warned on Tuesday it would assert its right to exercise self-defence.
The assault came on a day of violence that started when militants opened fire on troops in the former Islamist stronghold of Goundam, 80 kilometres (50 miles) from Timbuktu, killing two soldiers and a child.
UN Secretary-General Ban Ki-moon blamed fighters from the CMA and called for an “immediate cessation of the hostilities in northern Mali” following “serious ceasefire violations”.
The Malian defence ministry accused the rebels of the “murder” of a platoon leader, his deputy and an “innocent girl”, saying it was an attempt to “collapse” the peace process.