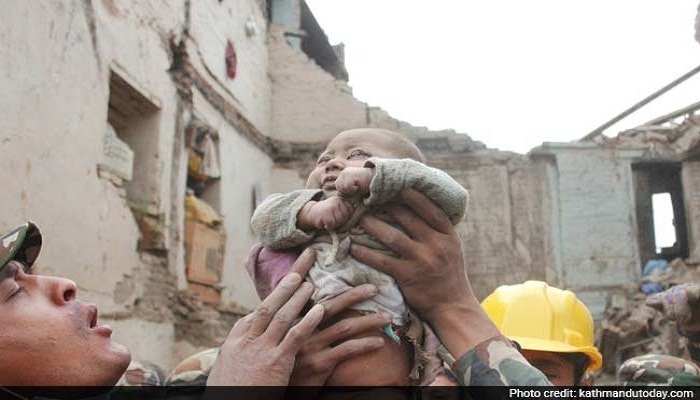 A four-month-old baby was pulled out alive by rescue workers from the rubble of a collapsed building in Bhaktapur town.

Kathmandu:  In a miracle, a four-month-old baby was pulled out alive by rescue workers from the rubble of a collapsed building in Bhaktapur town, at least 22 hours after the devastating temblor that struck Nepal.
Rescue workers and soldiers initially missed the baby as they searched through the debris desperately for survivors of the quake, Kathmandu Today newspaper reported today.
Amid the tonnes of debris a baby cried out in a faint voice, prompting the rescuers to check the entire area again.
The rescuers then carefully removed the rubble only to find the dust-covered baby boy under the debris.
The little boy - identified as Sonit Awal - was reported to be in stable condition without any internal injuries, the paper said.
The newspaper published images of the dust-covered baby. Hundreds of people are still trapped under tonnes of debris in the Kathmandu Valley and the worst-affected remote mountainous areas, as rescue workers are desperately searching for survivors of the Saturday's 7.9-magnitude earthquake.