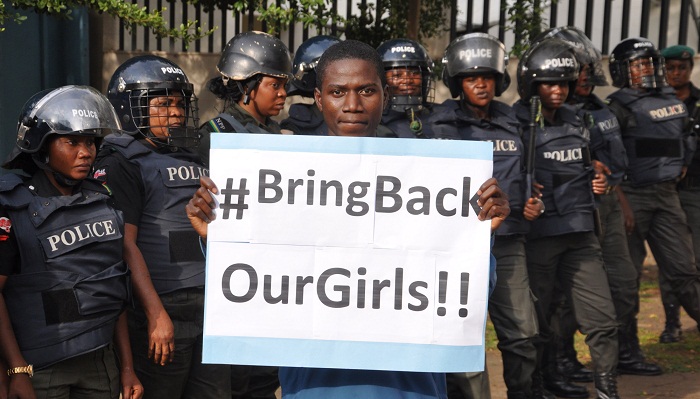 A man poses with a sign in front of police officers

Nigerian troops rescued nearly 300 girls and women during an offensive against Boko Haram fighters in the northeastern Sambisa Forest, the military said.
Director of Defence Information, Major General Chris Olukolade told Al Jazeera on Wednesday that it was too early to tell whether they included any of the schoolgirls abducted in Chibok a year ago.
Al Jazeera's Yvonne Ndege, reporting from Abuja, said the Nigerian military was planning to release photos and more information of the women and girls rescued.
"What we understand is that there is a screening process to find out where they are from. We managed to speak to Nigeria's military spokesman who believes some of the women are wives of Boko Haram fighters, and the military is not ruling out the possibility that some are from the Chibok school," our correspondent said.
The Associated Press news agency, however, quoted another army spokesman, Colonel Sani Usman, as saying that the 200 abducted girls and 93 women "are not the Chibok girls".
The army announced the rescue on Twitter on Tuesday and said it was screening and interviewing the abducted girls and women.
Nearly 300 schoolgirls were seized from the northeastern town of Chibok by the armed group Boko Haram in April 2014.
The fighters took the schoolgirls in trucks into the Sambisa Forest. Dozens escaped, but 219 remain missing.
International campaign
The plight of the schoolgirls, who have become known as "the Chibok girls," aroused international outrage and a campaign for their release under the hashtag #BringBackOurGirls.
Their kidnapping brought Boko Haram to the attention of the world, with even US first lady Michelle Obama becoming involved as she tweeted a photograph of herself holding the campaign sign.
Boko Haram has abducted an unknown number of girls, women and young men to be used as sex slaves and fighters. Many have escaped or been released as Boko Haram has fled a multinational offensive that began at the end of January.
Boko Haram has used girls and women as suicide bombers, sending them into crowded market places and elsewhere.
A month ago the Nigerian military began pounding the Sambisa Forest in air raids, an assault they said earlier they had been avoiding for fear of killing the Chibok schoolgirls, or inciting their captors to kill them.
Two weeks ago, counterinsurgency spokesman Mike Omeri said a multinational offensive that began at the end of January had driven Boko Haram from all major towns in the northeast and that Nigerian forces were concentrating on the stronghold in the Sambisa Forest.
Omeri said the military believed that the Chibok girls might be held there.
In Chibok, community leader Pogu Bitrus said townspeople were desperately trying to verify the identity of the freed girls and women. He said the town had learned of the rescue through social media, not from the military.
"We are trying to verify if there are Chibok girls among them. We are working hard to verify. ... All we know is this number have been rescued," he said.
Army misstatements
His comments reflected a distrust of the military, which has published many misstatements about the girls and once even claimed to have rescued some, though that proved to be untrue.
Unconfirmed reports over the past year had indicated the girls were broken up into smaller groups and had been forced to convert to Islam and that some were "married" off to their captors.
Some witnesses said they saw the girls being ferried by canoe across Lake Chad and into neighbouring Cameroon.
Boko Haram leader Abubakar Shekau published a video in which he threatened to sell the girls as slaves.
The group has been waging an increasingly deadly insurgency in Nigeria's mainly Muslim north since 2009, attacking schools teaching a "Western" curriculum, churches and government targets.
Civilians have borne the brunt of the violence. According to human rights group Amnesty International, more than 5,500 civilians have been killed and more than 1.5 million people, including 800,000 children, have fled their homes due to the violence.
Boko Haram implements a strict interpretation of Islamic law in the areas that it holds and wants to create an Islamic state in the mainly Muslim north.