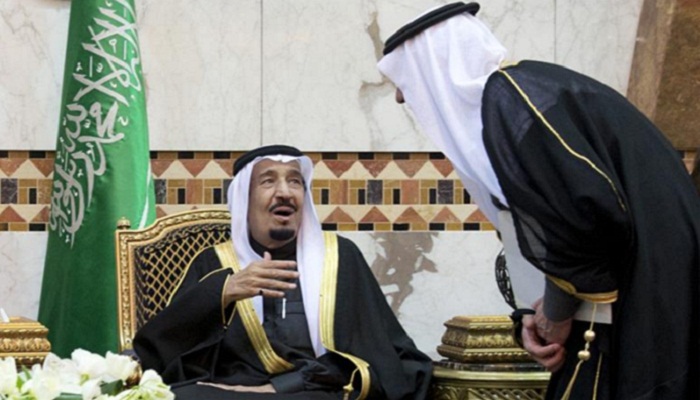 King Salman also appointed his son as deputy crown prince and replaced foreign minister Saud al-Faisal with Saudi's ambassador to the US [AP]
Saudi King Salman bin Abdulaziz has sacked his younger half-brother as crown prince and appointed his nephew, Deputy Crown Prince Mohammed bin Nayef, as the new heir apparent, state television said.
Al Jazeera's Mohamed Vall, reporting from Jizan in the country's south, said the reshuffle was announced by royal decree via state television early on Wednesday.
"Salman has relieved Crown Prince Murqin from his post, which was done upon his request. Now, Mohamed bin Nayef, who is 55 and the grandson of the founder of Saudi Arabia, is appointed as crown prince and also minister of interior," Vall said.
"This is a huge change in Saudi Arabia because this is the first time that a grandson of the founder of the country, rather than a son, is appointed crown prince," our correspondent said.
'Political earthquake'
Khalil Jahshan, the executive director for the Arab Centre of Washington from Fairfax, Virginia, said that the reshuffle constitutes a "political earthquake of the greatest magnitude".
"The Saudi Arabia we knew a few hours ago is no longer," Jahshan told Al Jazeera, adding: "These are serious changes that will have repercussions not only domestically but also internationally.
This is a very decisive answer to the doubts that many experts have expressed since Salman came to power with regards to his health, his decisiveness and his control over political matters in the kingdom. This is his unequivocal answer.
King Salman also appointed his son, Prince Mohammed bin Salman, as deputy crown prince, and replaced veteran foreign minister Prince Saud al-Faisal with the kingdom's Washington ambassador Adel al-Jubeir.
Faisal "asked to be relieved from his duties due to his health conditions," said the royal decree published on the official Saudi Press Agency, adding that he was appointed as an advisor and a special envoy of King Salman, as well as a supervisor on foreign affairs.
The latest nominations, part of King's Salman second cabinet reshuffle since he acceded the throne on January 23, come amid increased tensions between Sunni Saudi Arabia and its regional Shia rival Iran, following the kingdom's military intervention in neighbouring Yemen.
Jubeir has shone recently as he spoke frequently to reporters in the United States in defence of his country's decision to form a coalition launching air strikes on Iran-backed rebels in Yemen.
Faisal was first named in 1975, making him the world's longest-serving foreign minister.
He was sworn in again as foreign minister last month after Salman undertook a major government shakeup but left some veteran faces including Faisal in their posts.
Born in 1940, Faisal had been in the United States for back surgery when Salman was crowned ruler of the OPEC kingpin this year.
Also announced via royal decree, labour minister Adel al-Fakieh was appointed as economy and planning Minister, and Mufrej al-Haqbani was appointed as labour minister, state television reported.
King Salman, 79, came to power in January after the death of his half-brother, King Abdullah at the age of 90.