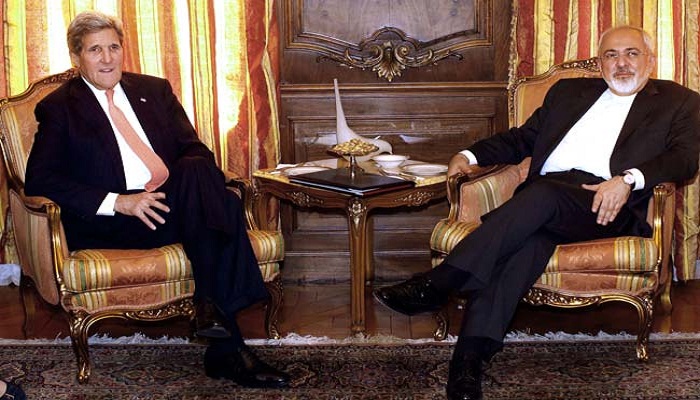 New York:  US top diplomat John Kerry met his Iranian counterpart Monday hoping to push forward tough nuclear negotiations as they reach the final phase, but also aiming to ease unrest in Yemen.
The secretary of state huddled with Iran's Foreign Minister Mohammad Javad Zarif for the first time since they hammered out the groundbreaking parameters for a final deal to curb Iran's nuclear ambitions during marathon eight-day talks in Switzerland earlier this month.
Since the talks under the aegis of the P5+1 group resumed in earnest in the fall of 2013, the US has insisted they are solely focused on the nuclear program.
But increasingly, US officials have acknowledged that discussions on other burning concerns, such as the growth of Islamic militants in Iraq and the unrest in Yemen fueled by
Iran-backed Shiite militias, have bled into the talks between two nations who do not have diplomatic ties.
Kerry said ahead of the talks that he was "confident that Yemen will be mentioned certainly, because Iran is obviously a supportive party to the Huthis."
"I will certainly urge that everybody do their part to try to reduce the violence and allow the negotiations to begin," he told reporters, adding that the future of Yemen must be decided by Yemenis and not "external parties and proxies."
Iran and the United States along with world powers are locked in a tough cycle of negotiations seeking to reach a deal by June 30.
Shedding Armageddon fears
Kerry and Zarif met at the New York residence of Iran's permanent representative to the United Nations, fresh from addressing a UN conference on the Nuclear Non-Proliferation Treaty.
"The vast majority of the world has come to the conclusion - united around the belief that nuclear weapons should one day be eliminated," Kerry told the conference.
"Today the race to nuclear arms that once sparked the fear of imminent Armageddon in billions of human beings and hearts, that has been supplanted in a wary but steady march... toward the promise of peace."
While the global community was closer than ever to a deal with Iran, Kerry said "the hard work is far from over and some key issues remain unresolved."
"If we can get there, the entire world will be safer," he insisted.
Lower-level negotiations resumed last week in Vienna after the April 2 breakthrough in Lausanne, but little has trickled out about the discussions.
The 75-minute meeting was "productive," a senior State Department official said, adding the two men had discussed the outcomes of last week's talks and "a path forward."
Under the agreed parameters, Iran, which denies seeking the atomic bomb, is set to scale down its nuclear program for 10 to 15 years or more, and allow closer UN inspections.
The exact details of how this will work, in particular the scale and timeframe under which the powers will lift painful sanctions slapped on the Islamic republic, still need to be nailed down.
But the deal under negotiation has raised hackles both at home and abroad.
Allies such as Saudi Arabia and Israel remain wary of US rapprochement toward Iran, while many US lawmakers are concerned about lifting sanctions on America's long-time foe and have demanded a say on any final deal.
Chief US negotiator Wendy Sherman said "the parameters, announced two weeks ago in Lausanne, offer the best chance at preventing Iran from obtaining a nuclear weapon."
"The alternatives fall far short of what we'll have if we're able to turn the political framework into a comprehensive agreement," she told a Jewish lobby group.
Without a deal, Iran would ramp up its number of centrifuges used to enrich uranium to 100,000 from about 19,000 currently, it would expand its fissile material stockpiles and the international community would have no oversight.
With a deal, "we will have eyes into every part of Iran's nuclear program from cradle to grave," Sherman said.