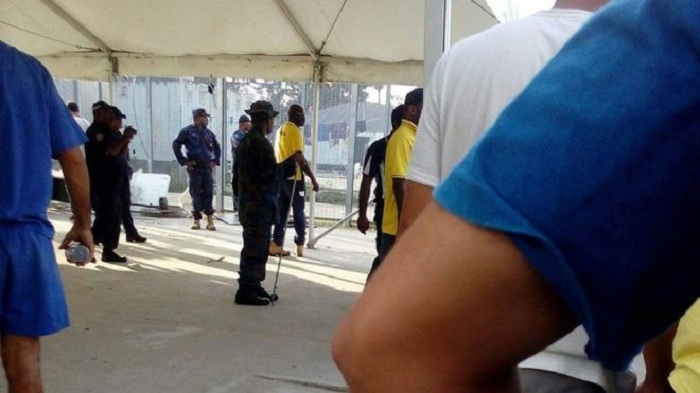 Police in Papua New Guinea (PNG) have entered a former Australian-run detention centre in a bid to get asylum seekers who remain there to leave, the Australian government has confirmed.

Hundreds of men have refused to leave the Manus Island centre since it was shut down on 31 October, citing fears for their safety.

On Thursday, multiple men inside the centre reported that PNG police had given them a one-hour deadline to leave the camp.

Australia said it was a PNG operation.

Under a controversial policy, Australia has detained asylum seekers who arrive by boat in camps on Manus Island and Nauru, a small Pacific nation.

Australia shut down the Manus Island centre after a PNG court ruled it was unconstitutional, urging asylum seekers to move to transit centres elsewhere on the island.

Immigration Minister Peter Dutton confirmed a police operation was under way on Thursday.

"The Australian taxpayers have paid about $10 million for a new facility and we want people to move," he told Sydney radio station 2GB.

"Obviously, it is in the end an issue for PNG police and the authorities up there but there is an operation involving police at the centre this morning."

Twitter post by @BehrouzBoochani: The refugees are sitting peacefully and immigration and police are asking them to leave the prison camp. The refugees are only listening and completely silent. They are talking on the microphone and shouting Image Copyright @[email protected]

One refugee, Abdul Aziz Adam, said a large amount of police officers had entered the compound.

"They had a really big microphone in their hands and started telling people 'you have to move'," he told the BBC, describing the police action as aggressive.

He said about 420 asylum seekers had gathered in one section of the centre, many of them linking arms, but he insisted they would "not respond" in any way.

The men have spent more than three weeks without electricity and running water, and dwindling food supplies.

Canberra has steadfastly ruled out allowing the men into Australia, arguing it would prompt further human trafficking and lead to deaths at sea.