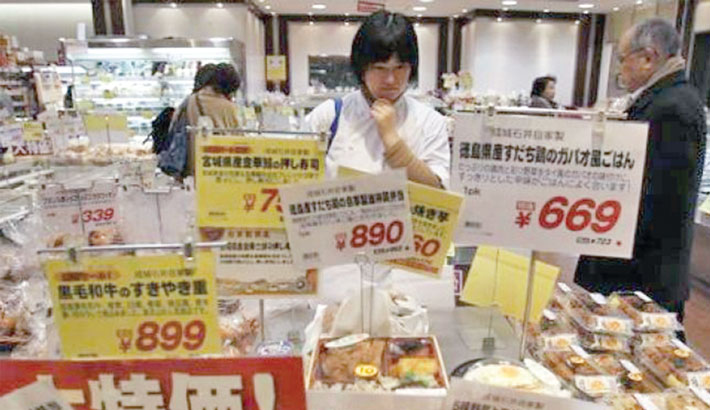 TOKYO: Japan notched up its seventh straight quarter of economic growth, official data showed on Wednesday, although the rate of expansion in the world's third-biggest economy is slowing.

Japanese gross domestic product (GDP) grew by 0.3 percent in the third quarter of the year, marking the longest string of gains for more than 16 years, reports AFP.


However, the figure represented a slowdown from the second quarter, when the economy grew by 0.6 percent, as a recovery in private consumption appeared to lose steam.

The economy grew by an annualised 1.4 percent, driven mainly by robust exports, the Cabinet Office in Tokyo announced. "On average, the Japanese economy is on track for a gradual recovery," Yoshiki Shinke, chief economist at Dai-ichi Life Research Institute, told AFP. He said the decline in private consumption growth was due to a "backlash" from the second quarter, where demand was "too strong."

Domestic demand -- which accounts for roughly 60 percent of Japan's GDP, contracted 0.2 percent, after a 0.9 percent rise in the second quarter.
Shinke noted that the weather in Japan was especially poor in the third quarter, which put a dampener on demand in the service sector.

Japan's economy has been picking up steam, mainly on the back of surging exports including smartphone parts and memory chips, with investments linked to the Tokyo 2020 Olympics also giving growth a boost.

Wage rises have been tepid, however, and Tokyo has struggled to overcome years of deflation.

Falling prices can discourage spending by consumers, who may postpone purchases until prices drop further or save the money instead.
That creates a cycle in which firms then cut back on expanding production, hiring new workers or increasing wages.


"We can't say the recovery is led by domestic demand, but demand is not that bad if you calculate the average figure this year," said analyst Shinke.

"Looking ahead, as the global economy -- including the US and Europe -- is in good shape, the export-led recovery is expected to continue in the fourth quarter," he said.