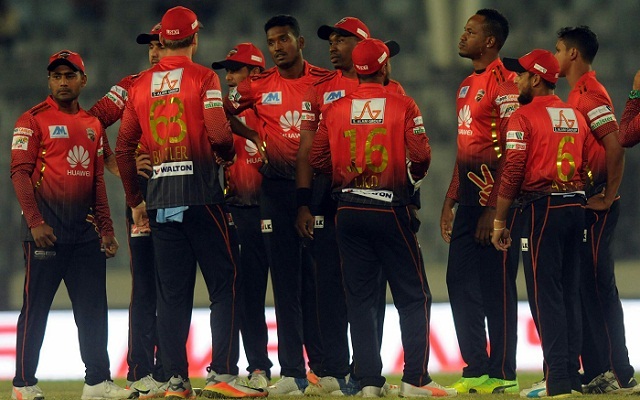 Chasing a target of 116 runs, Comilla shored their win scoring 120 for 1 in 15.1 overs where Jos Buttler and Imrul Kayes shared an unbeaten partnership of 97* off 13.1 overs in the 2nd wicket stand.

Farhad Reza conceded 31 runs in two overs for one wicket.

Sent in to bat first, Rajshahi scored 115 for 7 in 20 overs where opener Lendl Simmons top-scored 40 off 40 off 23 balls, including six boundaries and one six, before being retired hurt at 48/2 in 5.4 overs.

Number 8 batsman Farhad Reza played an unbeaten innings of 25* off 30 balls with a boundary while skipper Mushfiqur Rahim (16 off 14b; 3x4) and Mohammad Sami (10* off 16b) were the other double digit scorers for the side.

Al-Amin Hossain and Dwayne Bravo took one wicket each for 24 and 28 runs in three and four overs.

With the day's results, Comilla collected four points from three games as they earlier lost their 1st game against Sylhet Sixers by four wickets before an emphatic eight wickets victory against Chittagong Vikings in the next game.

Bottom-run Rajshahi collected two points from four encounters, suffering a six-wicket loss against Rangpur Riders in their 1st match, and then suffered another loss against the table topper Sylhet Sixers by 33 runs before upset Rangpur Riders to taste the maiden win with an emphatic eight-wicket margin before the day.