Anisul for issuing Bar Council certificate on basis of talent 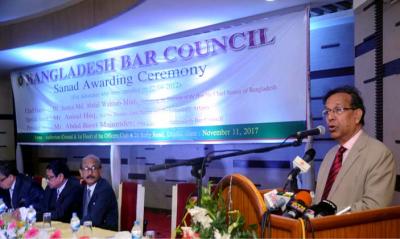 Law, Justice and Parliamentary Affairs Minister Anisul Huq has emphasized that Bar Council certificates should be issued only on the basis of talent and quality to uphold the dignity of law profession.

"Bar Council certificates should be given only on the basis of talent and quality in the greater interest of the lawyers and to keep the standard and dignity of law profession intact," an official release quoted the minister as saying at a certificate awarding ceremony at the Officers Club auditorium in the city on Saturday.

The newly enrolled lawyers under the Bangladesh Bar Council (BBC) were awarded certificates at the function, the release said.

No flexibility in scrutinizing the talent and quality is desirable, Anisul said, urging all concerned to follow it strictly. He gave assurances of all kinds of support in this regard.

To build an exploitation and deprivation free and just society was one of the goals of the country's liberation war, the minister said, adding that the present government is working to strengthen the foundation of democracy and establish justice and rule of law in the county in line with the spirit of the liberation war.

The minister said Father of the Nation Bangabandhu Sheikh Mujibur Rahman dreamt of a modern Bar Council to transform the country into a 'Sonar Bangla' while his daughter Prime Minister Sheikh Hasina is working to strengthen the Bar Council aimed at improving quality and dignity of the law profession.

Stressing the importance of training and learning to acquire professional skill, Anisul said it is difficult to achieve professional excellence without training.

The law minister also urged the new lawyers to abide by the code of conduct, uphold congenial environment on the court premises and give legal aid to the marginal people of the country.