Nigeria to vote for state governors and assemblies 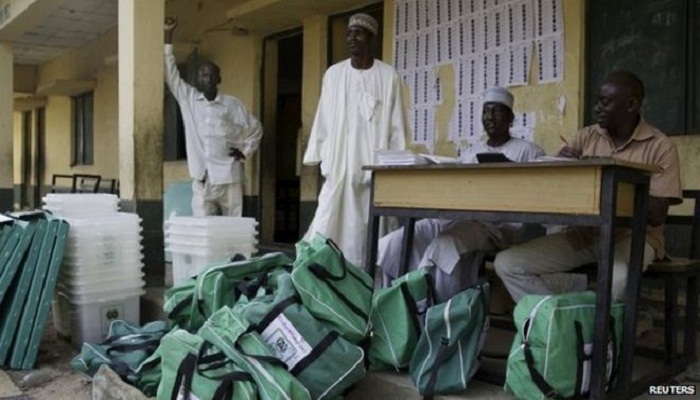 Polling stations are due to open on Saturday morning

Nigerians are to vote for state governors in the final round of the country's election process.
Elections for 29 governors and state assemblies are taking place on Saturday.
Some of Nigeria's governors control huge budgets and are among the country's most influential politicians.
The vote comes two weeks after Muhammadu Buhari won the presidential election, defeating incumbent President Goodluck Jonathan.
Gen Buhari won by more than 2.5 million votes, becoming the first opposition candidate to win a presidential election in Nigeria.
But in many states, Saturday's gubernatorial and state assembly elections could prove to be a tight race between Mr Jonathan's People's Democratic Party (PDP) and Gen Buhari's All Progressives Congress (APC).
Nigeria's 36 governors enjoy wide powers and some, especially in oil-producing areas, control bigger budgets than those of national governments in some neighbouring West African countries.
The key battlegrounds include commercial hub Lagos, and the oil-rich Rivers state.
Tensions are reported to be especially high in Rivers. The AFP news agency reports that an overnight curfew was imposed on the eve of the election to prevent any violence.
The Independent National Electoral Commission (Inec) spokeswoman for Rivers state, Tonia Nwobi, told AFP that they were working with security agents to ensure a "hitch-free election".
Results are not due until Sunday.
Biometric voting cards are to be used again, despite some problems with their debut in last month's election.
Technical problems slowed down voter registration, even affecting President Jonathan.
But Abubakar Momoh from Inec told Reuters that the new system was crucial.
"The card reader is the only way that rigging on a large scale can be stopped in this country," he said.
Observers have generally praised the recent presidential election, though there have been allegations of fraud even with the use of biometric voting cards.